Skip to content
In my recent review video of Olympus M.Zuiko 12-45mm F4 PRO, I asked if there was an interest of me doing a side by side extensive comparison between the 12-45mm F4 versus the older yet much revered 12-40mm F2.8 PRO lenses. Looking at the comment section of that video I received overwhelmingly “yes” response to that question, so here it is, I am doing both a blog article and a video comparison for the two mentioned lenses. I did make a bold claim previously based on my early observations the 12-45mm F4 PRO seems a little sharper than the 12-40mm F2.8 PRO, but I made that claim without an extensive side by side comparison, so this article and video will be a continuation from the previous review. This comparison tests took a lot more time and effort than usual, I did have a tonne more samples but I am only showing the best few selected ones in this blog entry and of course, my video.
On specifications, both lenses exhibit many similarities and some obvious key differences.
SIMILARITIES between 12-45mm F4 and 12-40mm F2.8 PRO
1) Full weather-sealing, splash, dust and freezeproof down to minus 10 degrees Celcius
2) Metal body construction
3) Internal focusing mechanism, the front element does not rotate when zooming
4) No internal zooming, the lens extends out when zooming in
DIFFERENCES between 12-45mm F4 and 12-40mm F2.8 PRO
1) F4 constant aperture on 12-45mm versus F2.8 on 12-40mm, allowing 12-40mm to render shallower depth of field and is better in low light scenarios
2) 12-45mm F4 is smaller and lighter, better suited for smaller cameras
3) 12-45mm F4 does not have manual focusing clutch and L-Fn button, both features available on the 12-40mm F2.8
Here is my testing methodology and its limitations:
1) The test camera is my own Olympus OM-D E-M5 Mark III. This camera is representative of the best image quality achievable by current Olympus OM-D system, having similar image sensor with E-M1 Mark III and E-M1X.
2) All images were shot hand-held, with approximate matching framing. Even if tripod is used I cannot 100% match the composition between each images, there will be slight variance, and in real life shooting scenario, where I do need to move to many locations, having a tripod is not practical and is cumbersome. Hence there is a slight mis-match when it comes to composition but this should not affect the overall outcome significantly.
3) All camera settings are controlled and maintained the same for both lenses used in each scenario. I shot at aperture priority as I fixed the aperture at F4 and ISO200 (except for the bokeh test). Shutter speed is fast enough to be inconsequential for all tests.
4) All images were shot in available light, in late afternoon, either outdoor or with sufficient window side light (except the bokeh test which was shot at night). There is a possibility of light shifting from one frame to another as I cannot control the cloud movements in the sky. I have shot many samples to have large enough data pool to minimize lighting inconsistencies.
5) I am not comparing distortion, chromatic aberration and vignetting as these technical lens flaws are effectively corrected via in camera software.
6) All images were straight out of camera RAW, previewed via Olympus Workspace with zero adjustment performed. Noise Filter were set to “0” and sharpness setting was at default “0”, both in camera settings.
7) There is also the possibility of sample variance. My 12-45mm PRO lens is a sample review unit from Olympus, which they claimed to be similar to mass production quality. Having said that, even there is sample variance between mass production units, so your 12-45mm lens may be slightly better or worse than the one I was using for this test.
I am human. I do not claim to be perfect. Recently someone bombarded me for some of the few mistakes I made in my recent articles and videos. I can only do my best. If my best is not enough for you, feel free to go to other review websites and channels.  I am already spending too much time doing this, and if you do not appreciate it, there is nothing I can do.
For easy reference – image on the LEFT 12-45mm F4, image on the RIGHT 12-40mm F2.8. Click the images to enlarge.
TEST 1 – WIDE ANGLE 12MM AT F4
First test, both lenses were set to the widest focal length 12mm and the sharpness at the center of the frame and corners are inspected. Both lenses were set at F4 for consistency in comparison.
For this wide angle shoot-out, at center sharpness, the image quality in terms of sharpness and fine detail rendering are extremely close between the two lenses, but the 12-45mm F4 does show a slight advantage in resolving a little more fine detail, contrast and better defined lines. You do need to pixel peep very closely to notice the differences, but the 12-45mm F4 is a better performer.
However, when it comes to corner sharpness, there is no denying that the older 12-40mm PRO holds the upper hand, but the corners of 12-45mm F4 is still very good.
LEFT 12-45mm F4, RIGHT 12-40mm F2.8 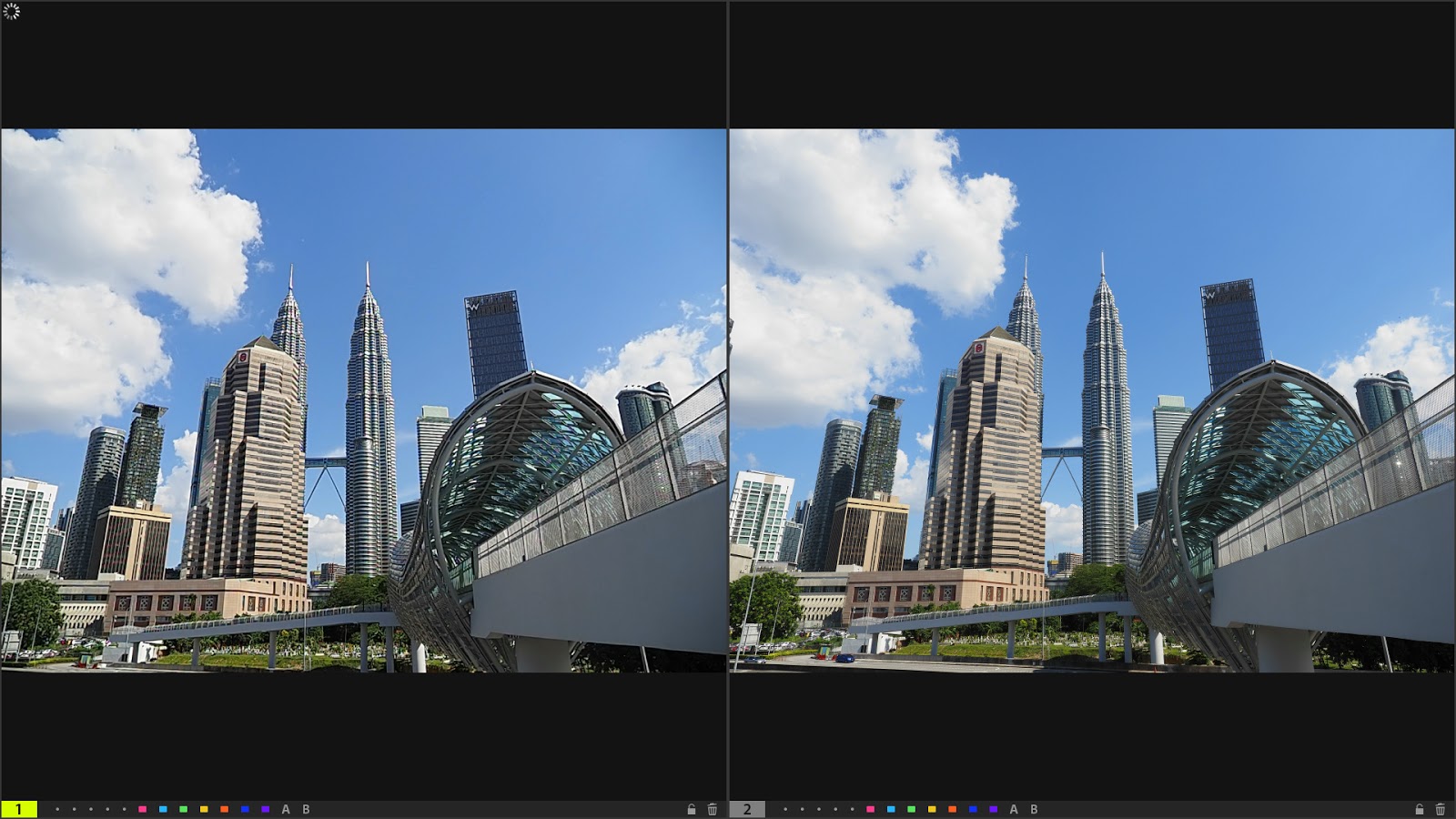 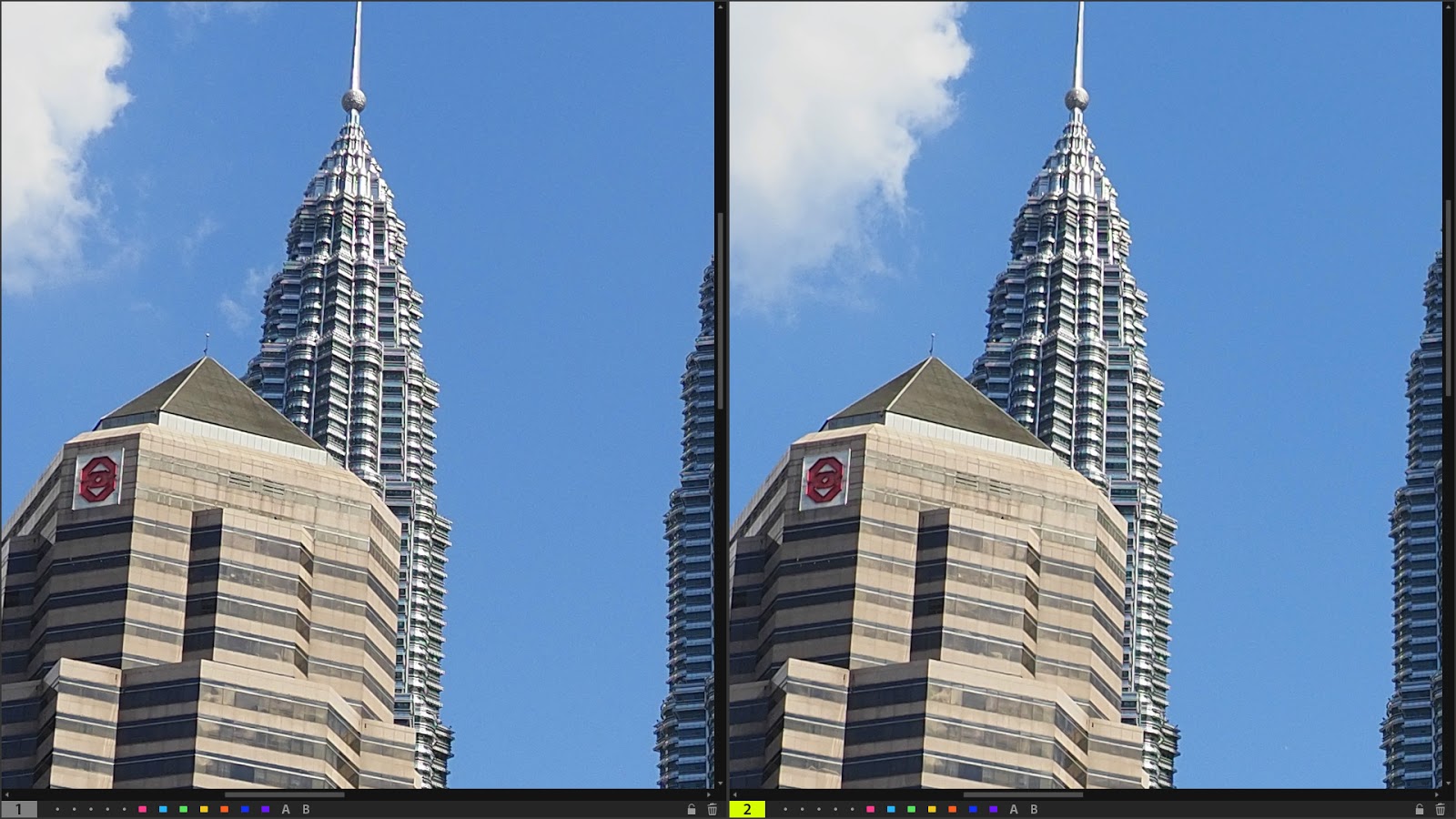 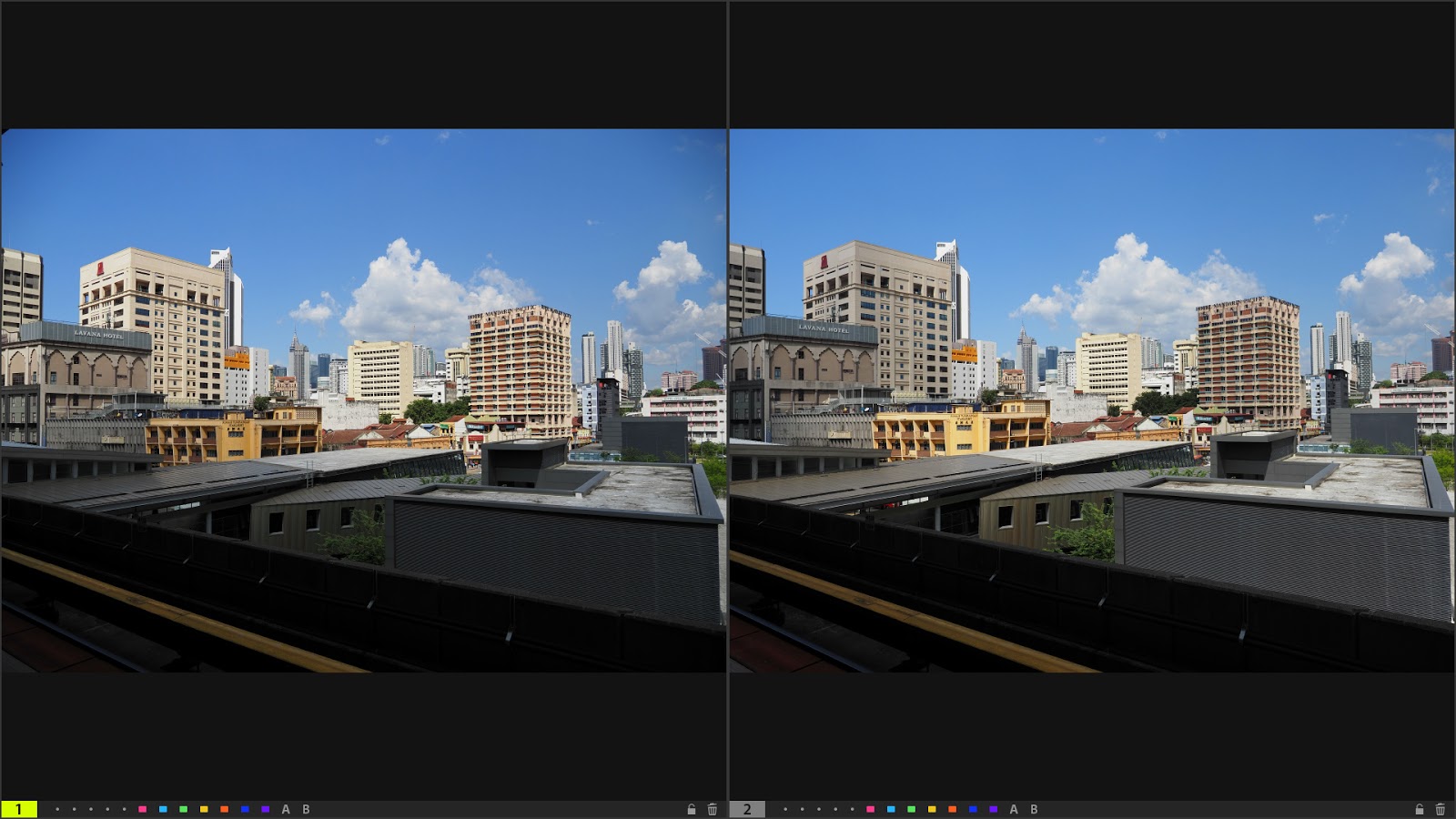 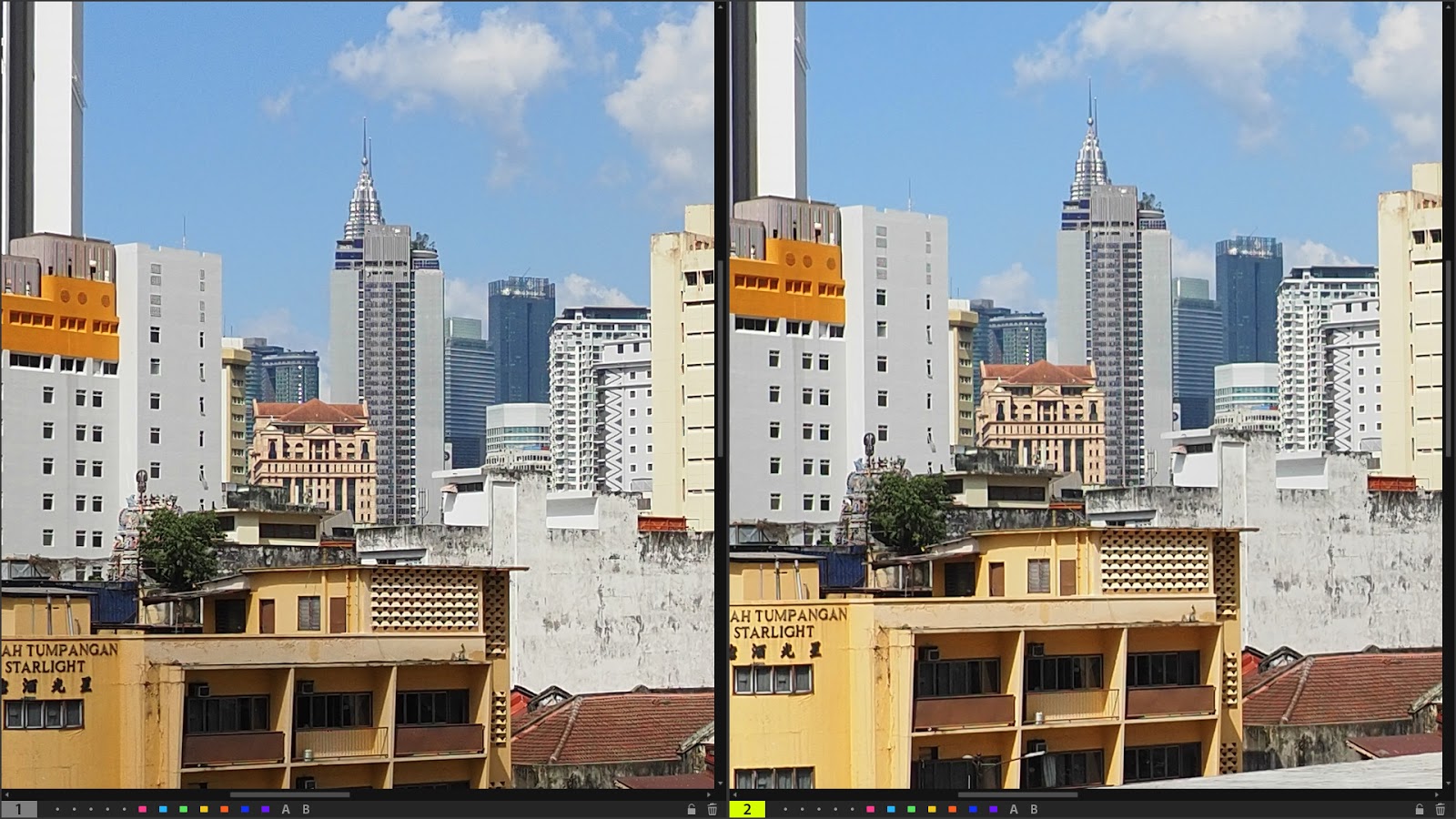 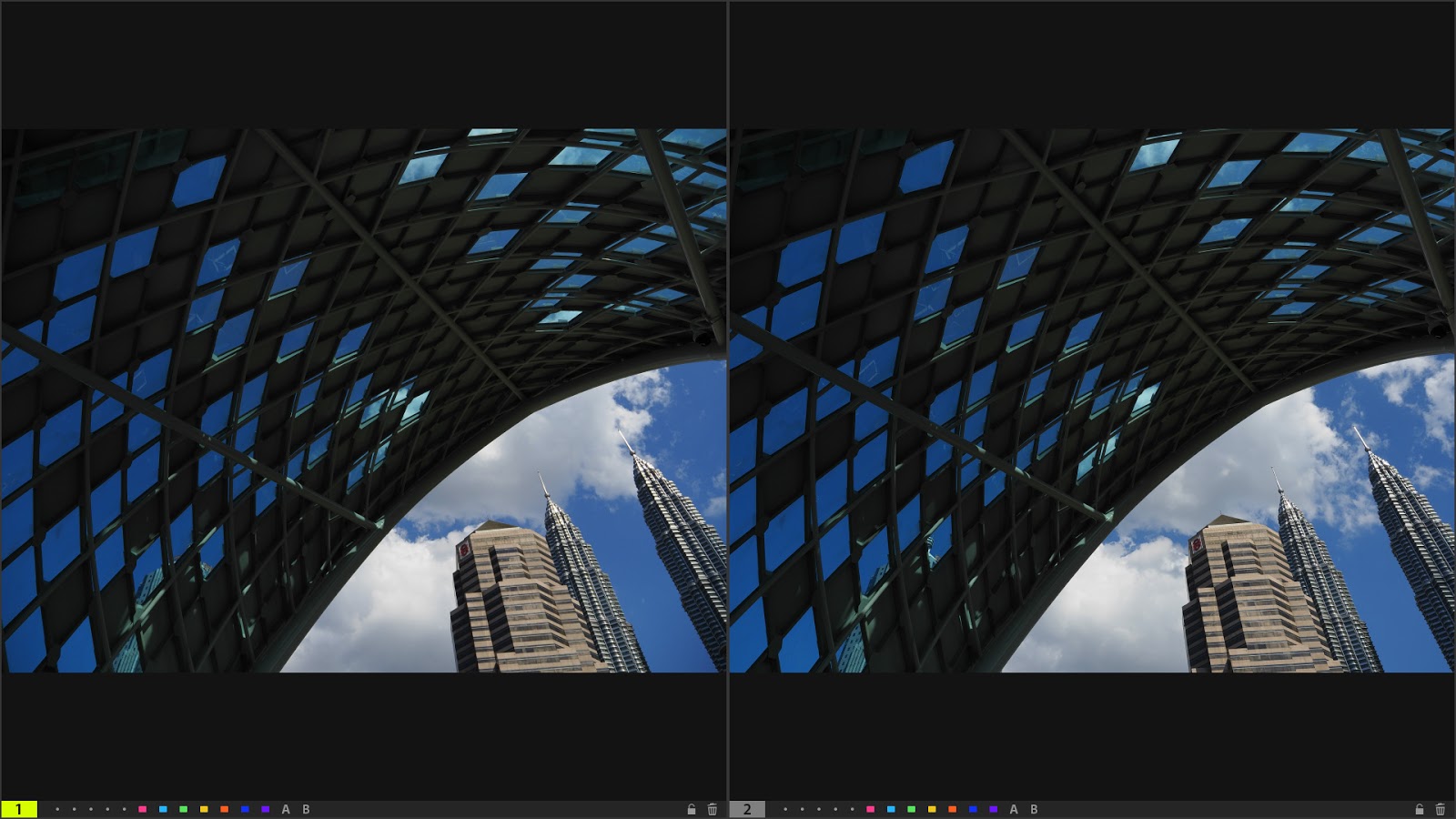 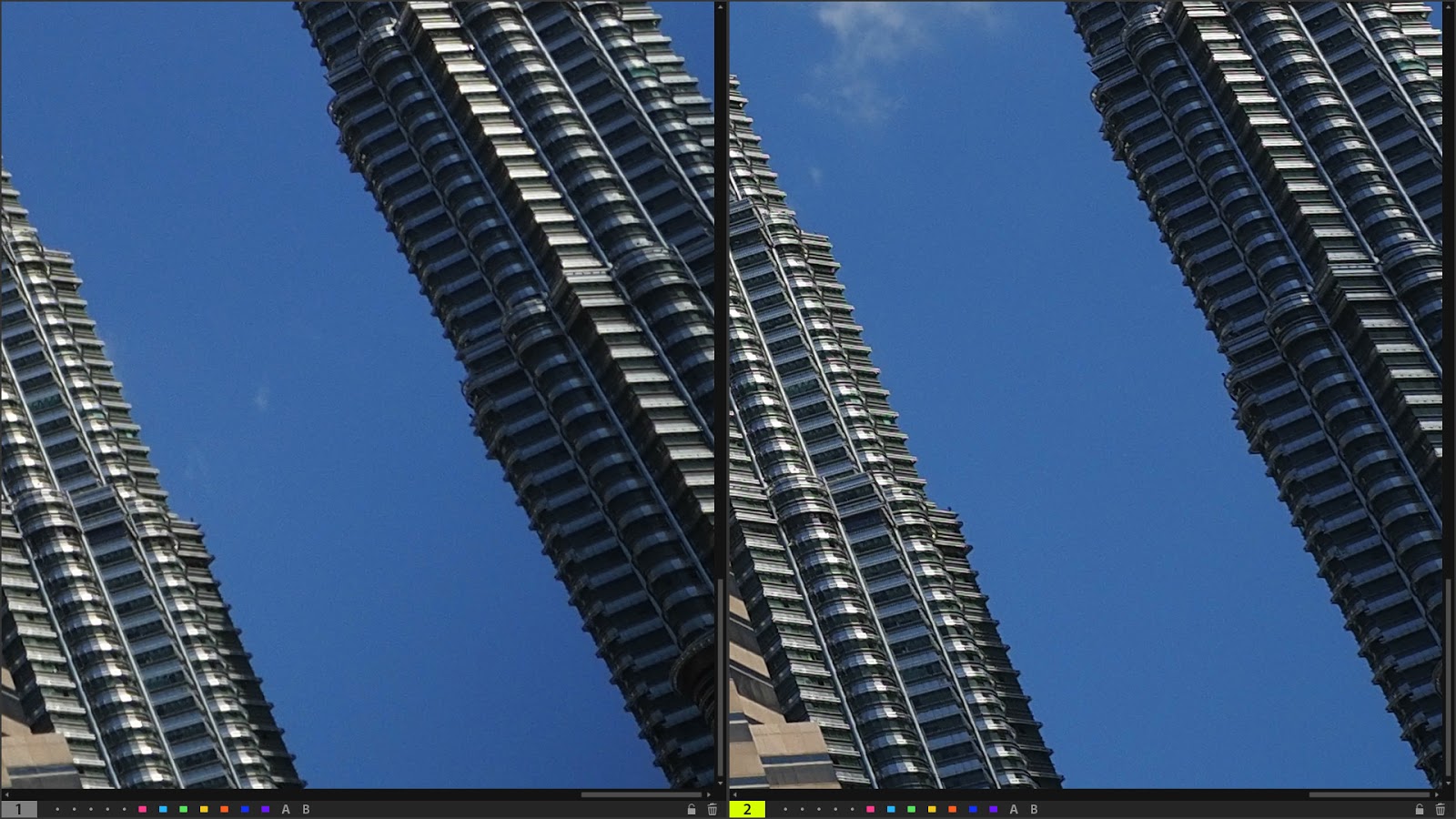 TEST 2 – TELEPHOTO END
Second test at maximum telephoto end of both lenses, 12-45mm at 45mm and 12-40mm at 40mm. Again, both lenses are set at F4 for comparison.
Scrutinising the results, as expected like the previous tests, the output from both lenses come really close, in fact it was not easy to tell apart which image was taken with which lens. However, 12-40mm F2.8 does resolve a tiny bit more details, and images in complex rendering areas such as leaves and textured patterns on the building have a bit more contrast and sharpness bite. The 12-45mm F4 comes very close, bit I have to give the win to 12-40mm shooting at telephoto end of the lens. Again, the sharpness difference of the two lenses are almost negligible when it comes to practical shooting, and that slight advantage won’t translate to real world difference.
LEFT 12-45mm F4, RIGHT 12-40mm F2.8 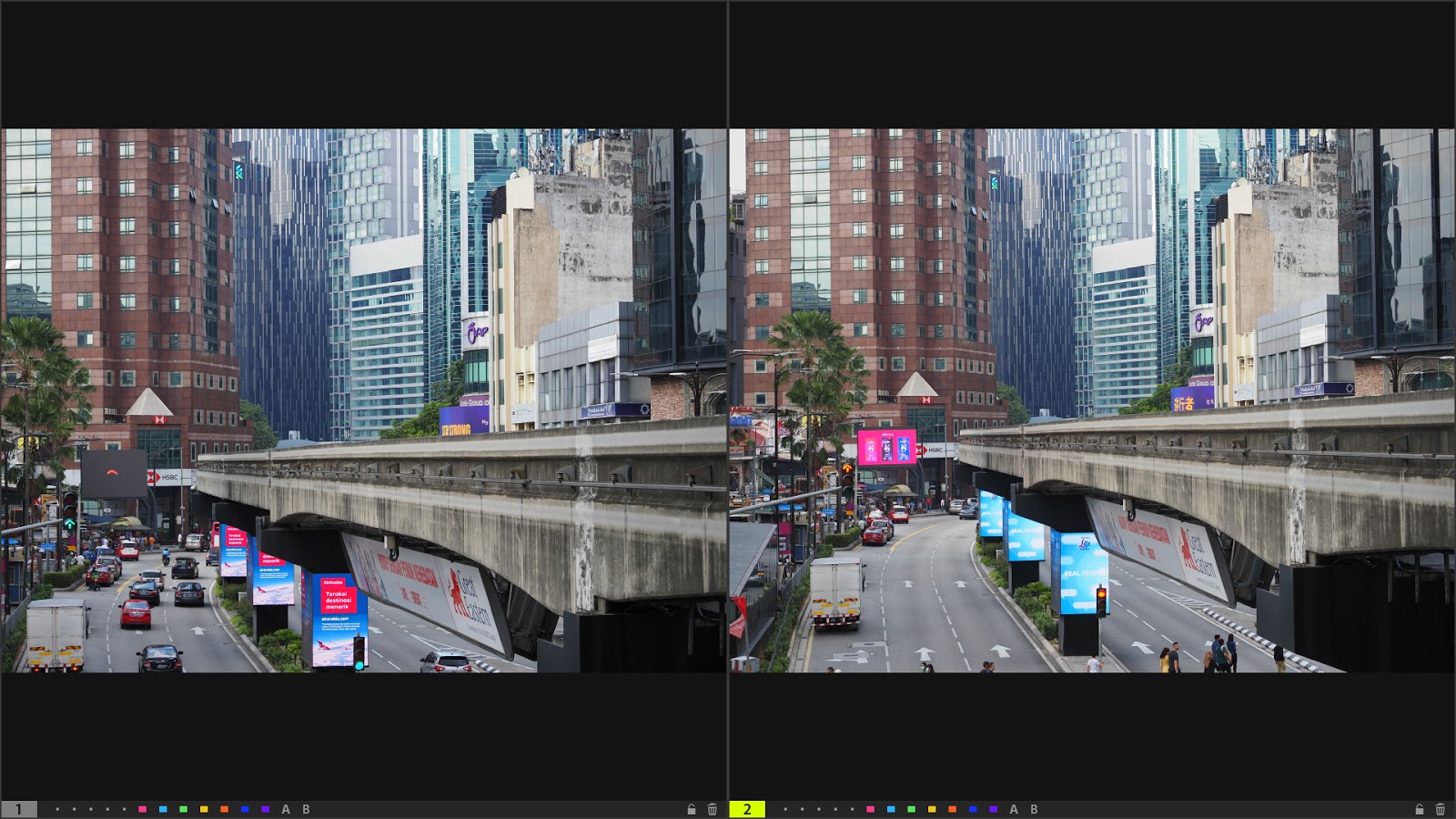 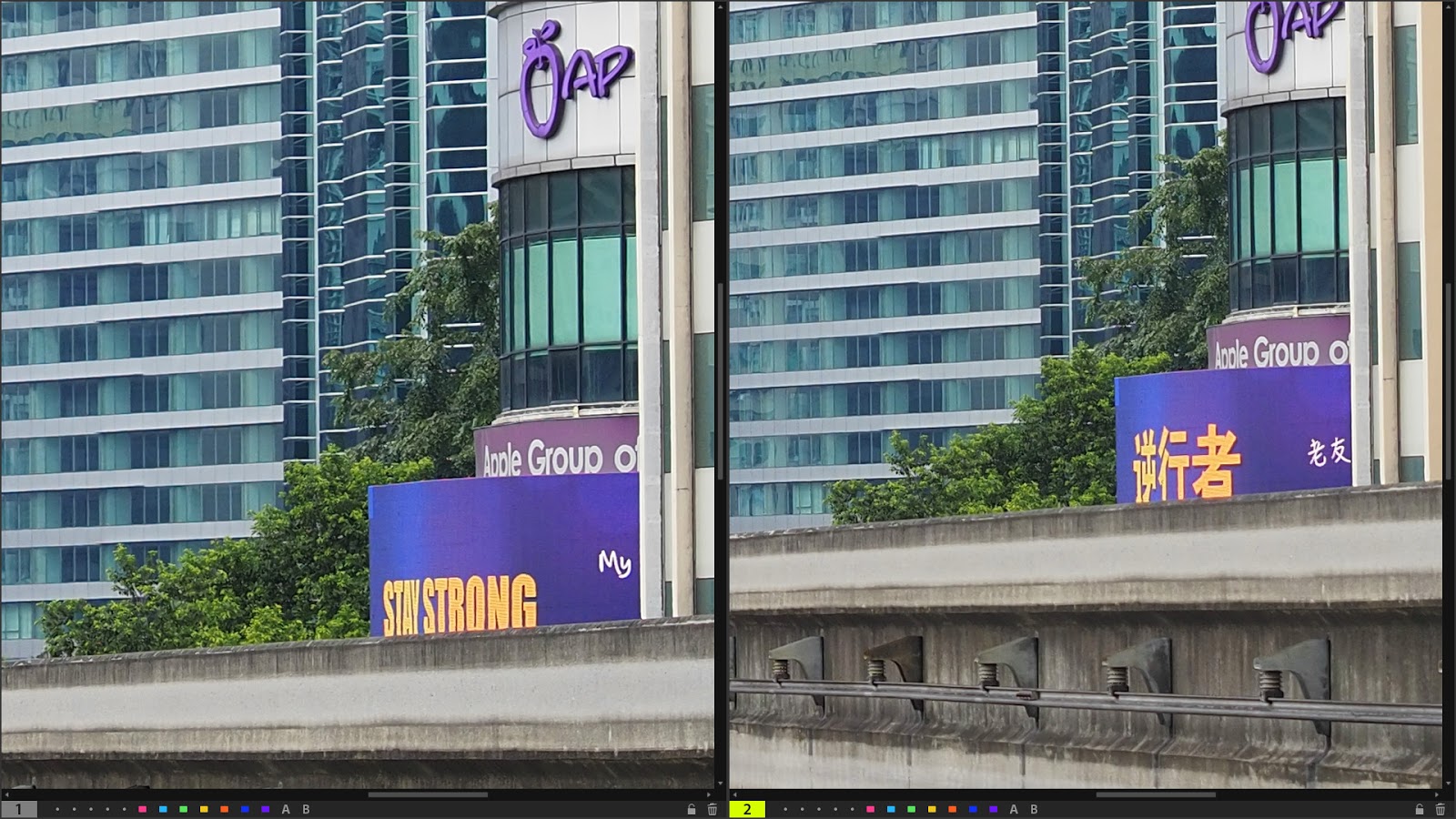 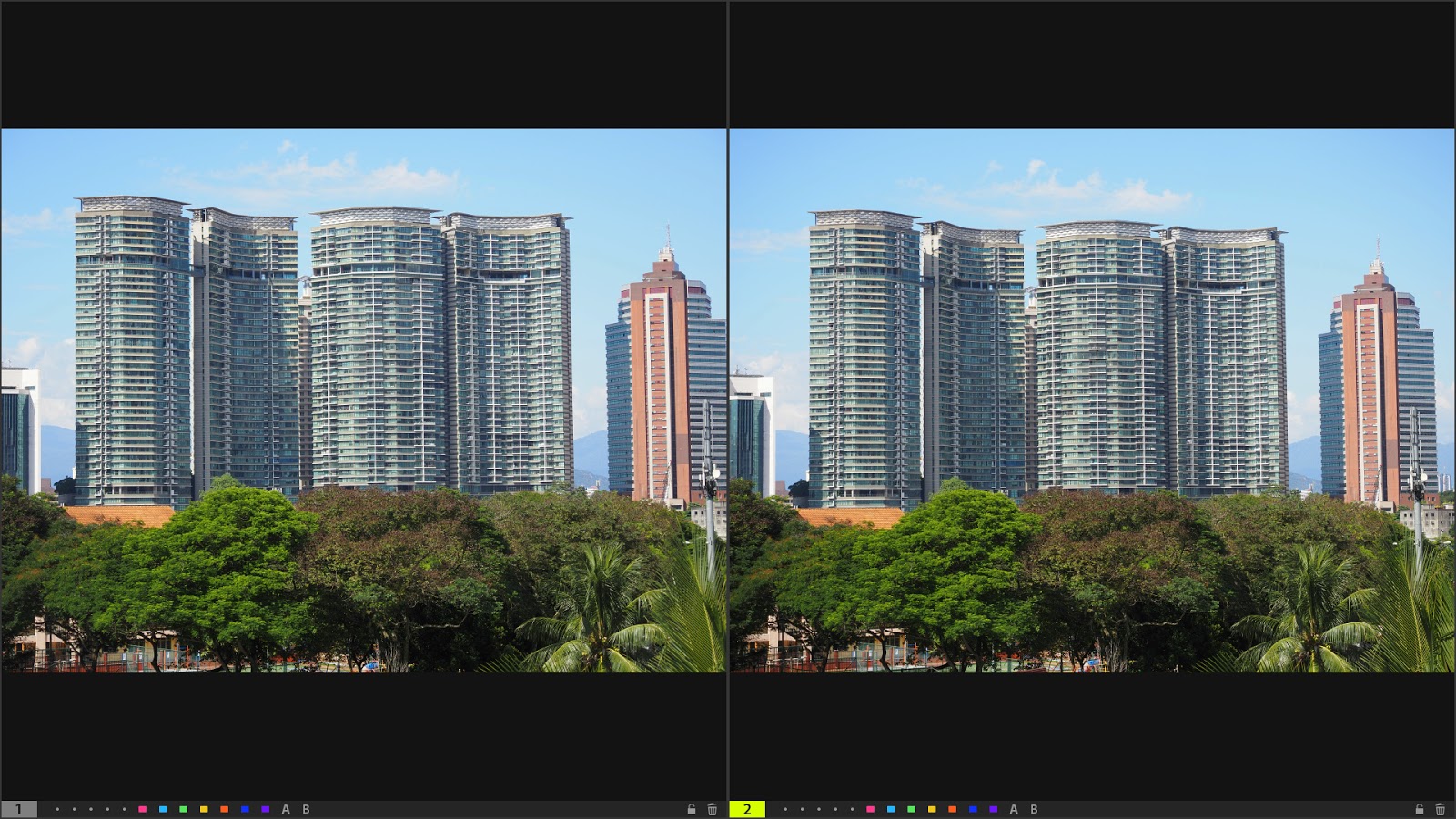 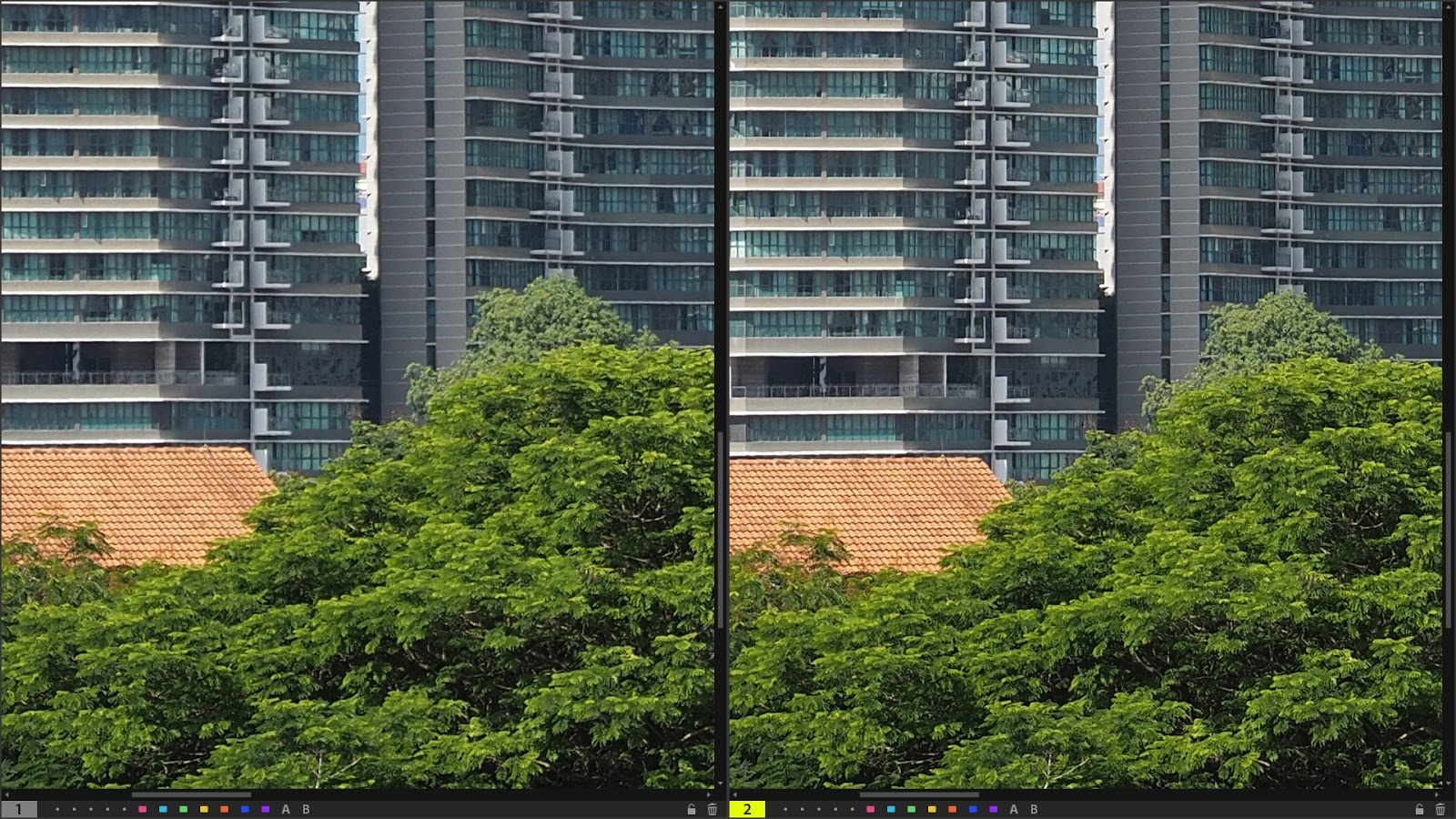 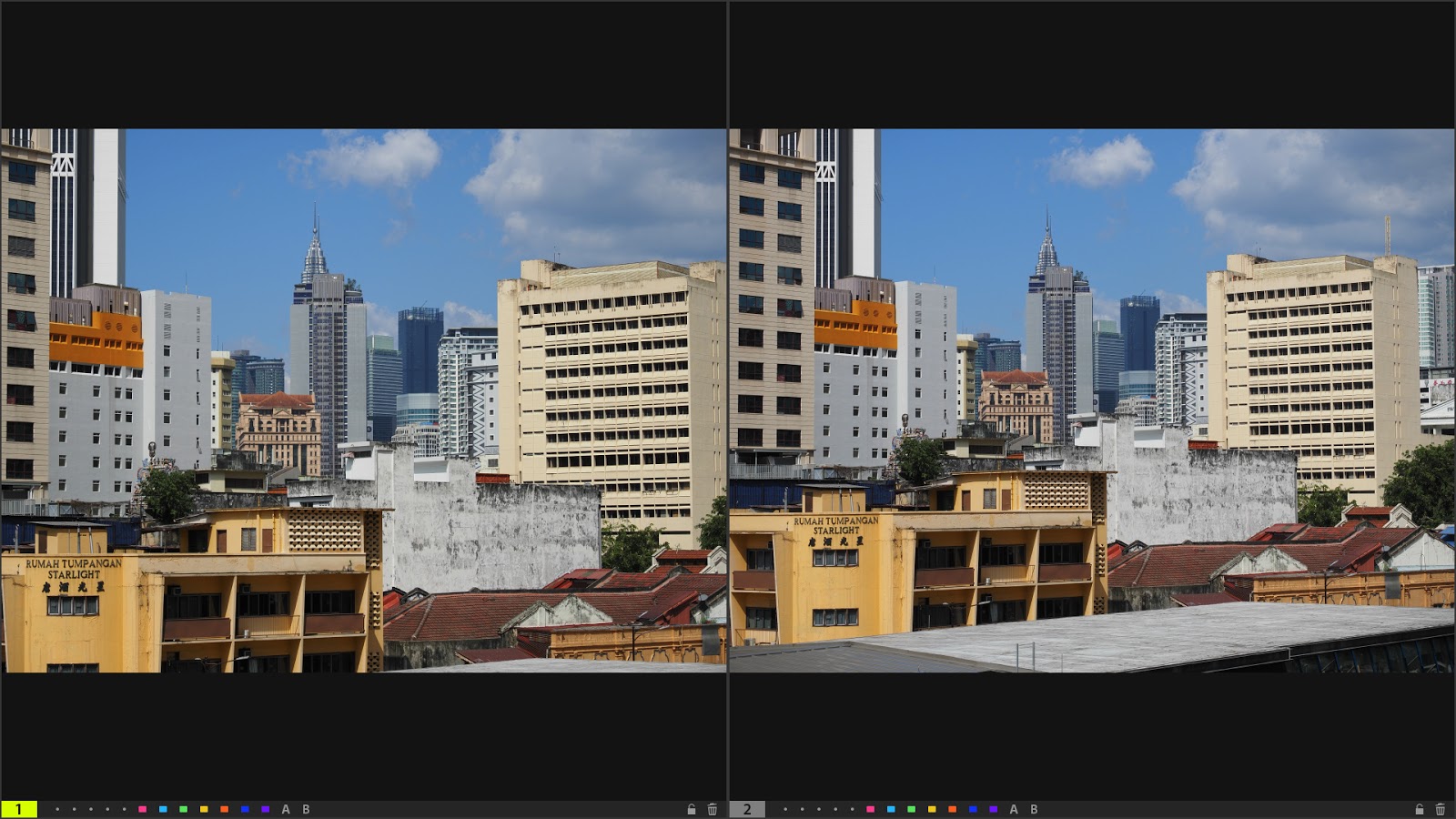 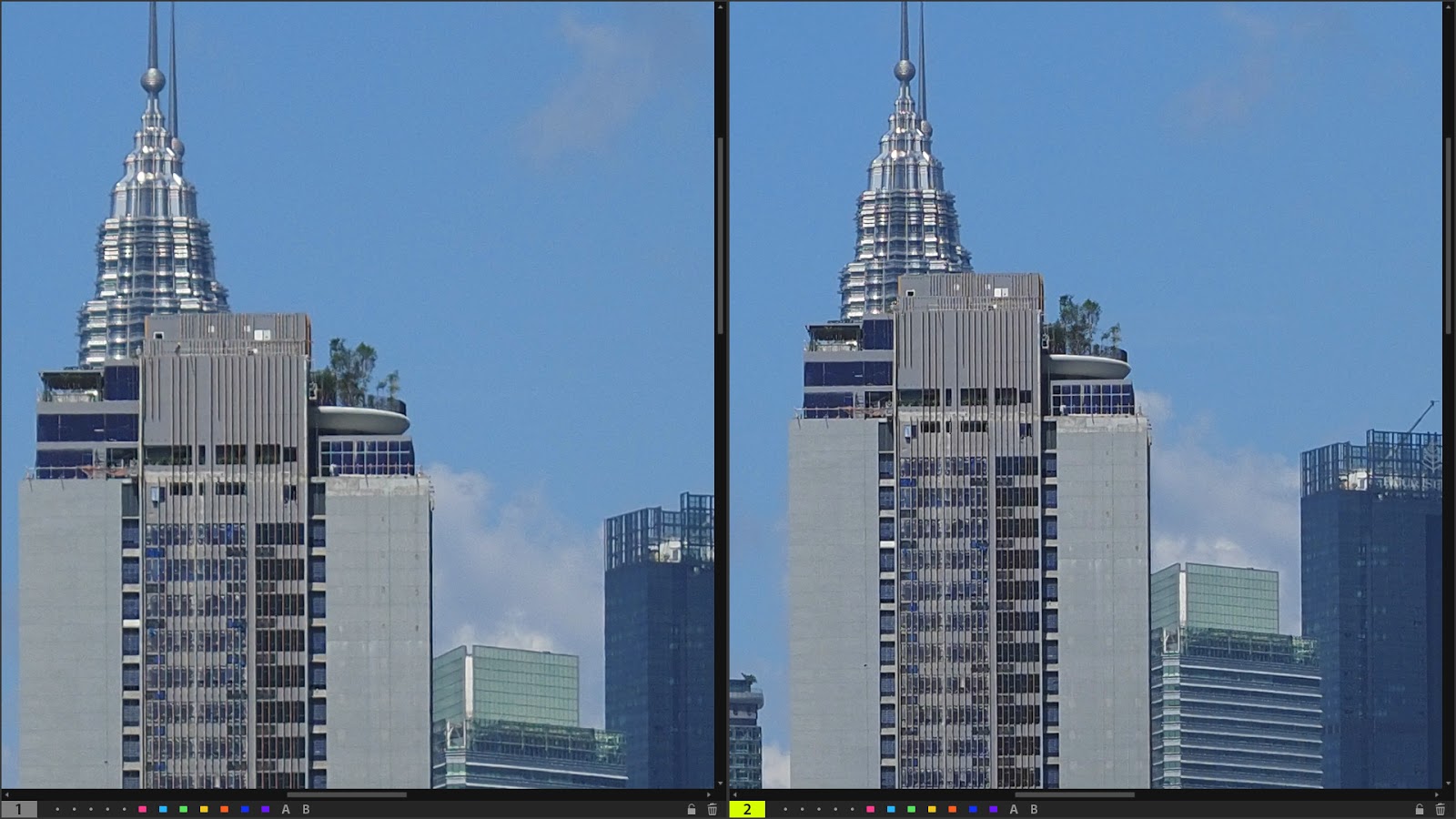 TEST 3 – CLOSE UP SHOOTING
Both 12-45mm F4 and 12-40mm F2.8 have respectable close up shooting capability, with decent magnification. I am shooting both images at 25mm focal length at F5.6 to increase depth of field.
Both lenses performed superbly in close up shooting, being able to reveal incredible amount of details in the food texture. Upon closer inspection, the 12-45mm F4 is looking a tad sharper, but again the small difference against 12-40mm is nothing to shout about.
At this point, I am super impressed that 12-45mm F4, the smaller sibling can hold its weight really well against the heavier 12-40mm F2.8, and in some cases has surpassed the 12-40mm in optical performance. The 12-45mm F4 truly deserves the PRO label.
LEFT 12-45mm F4, RIGHT 12-40mm F2.8 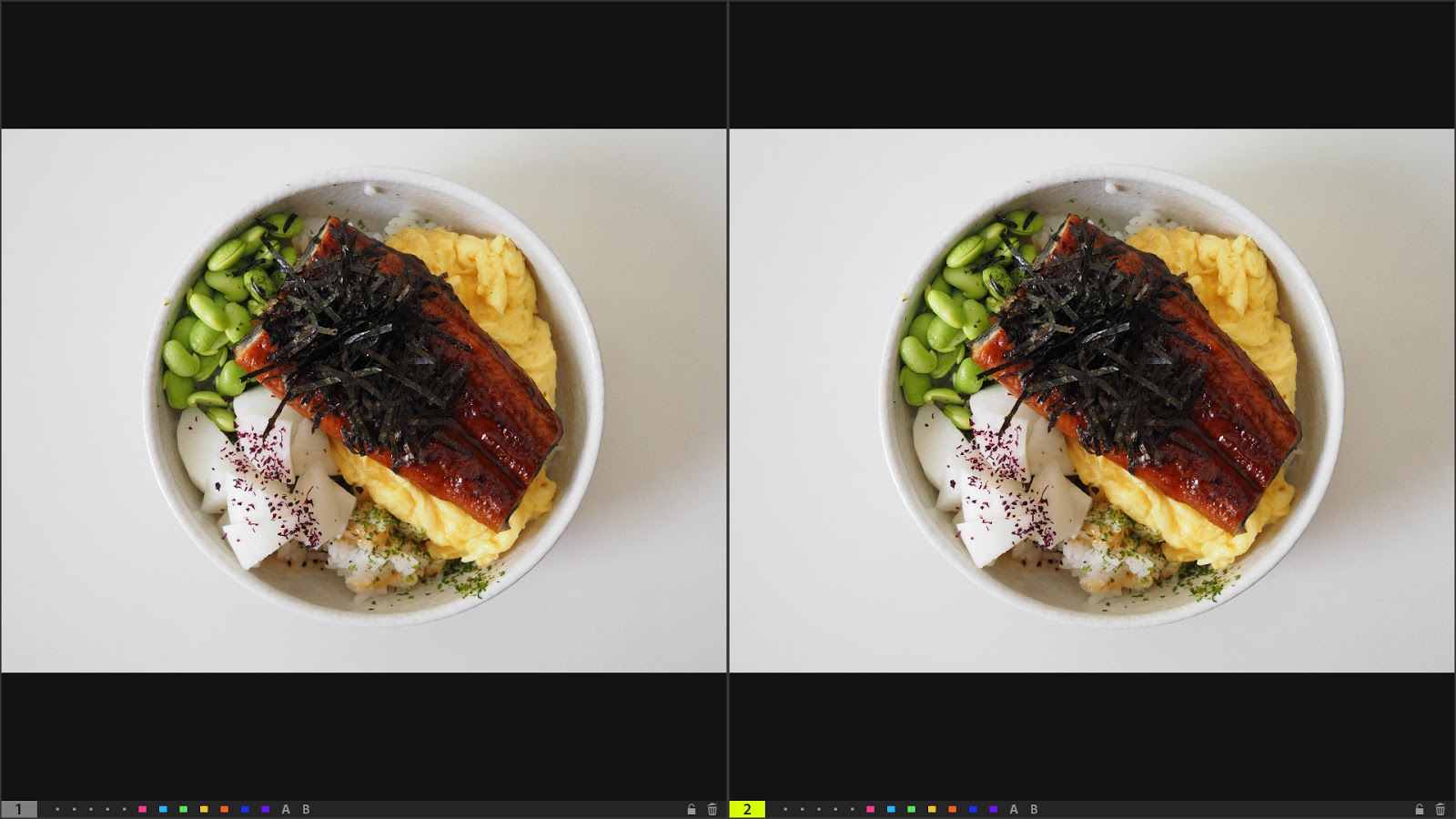 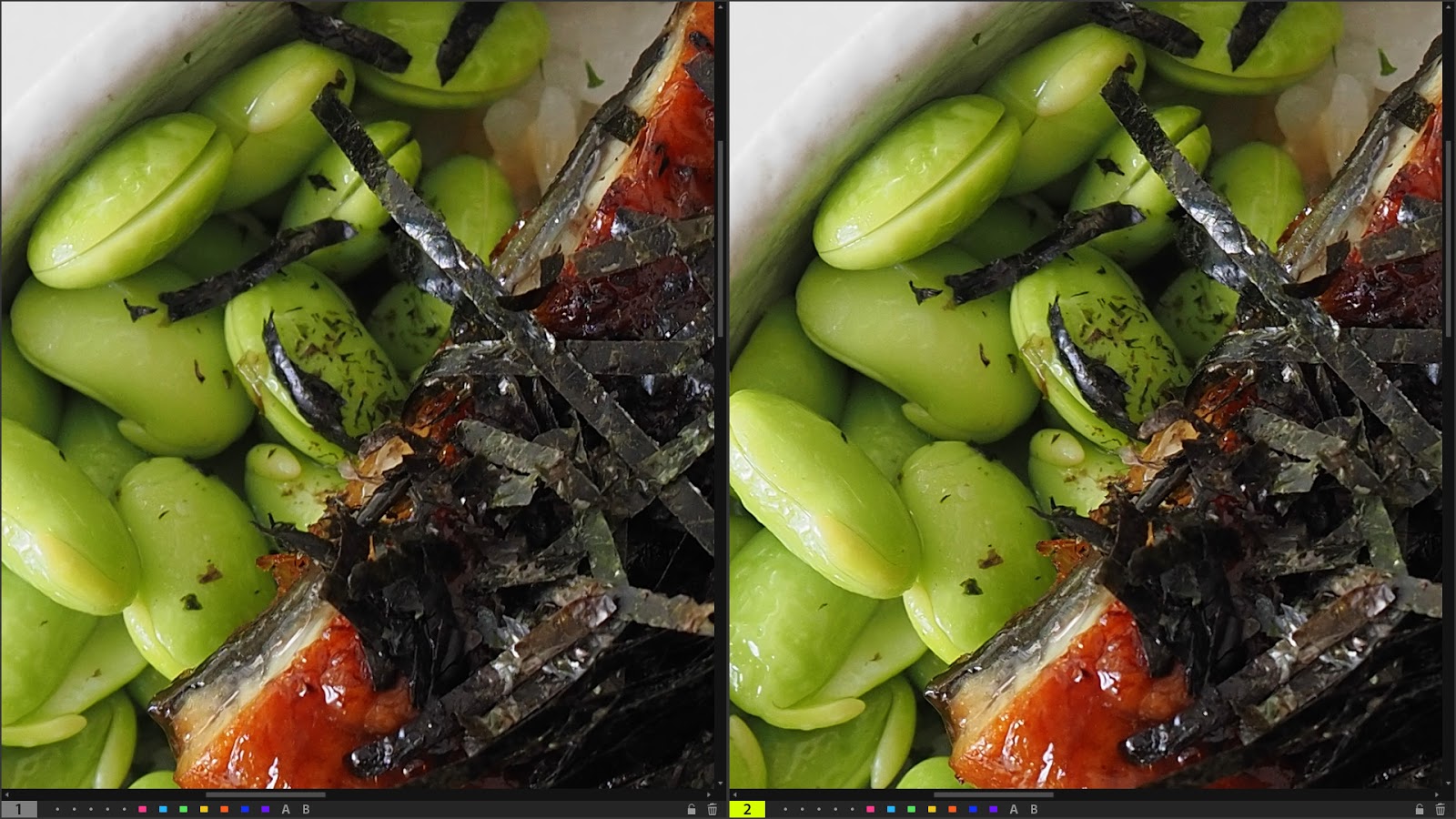 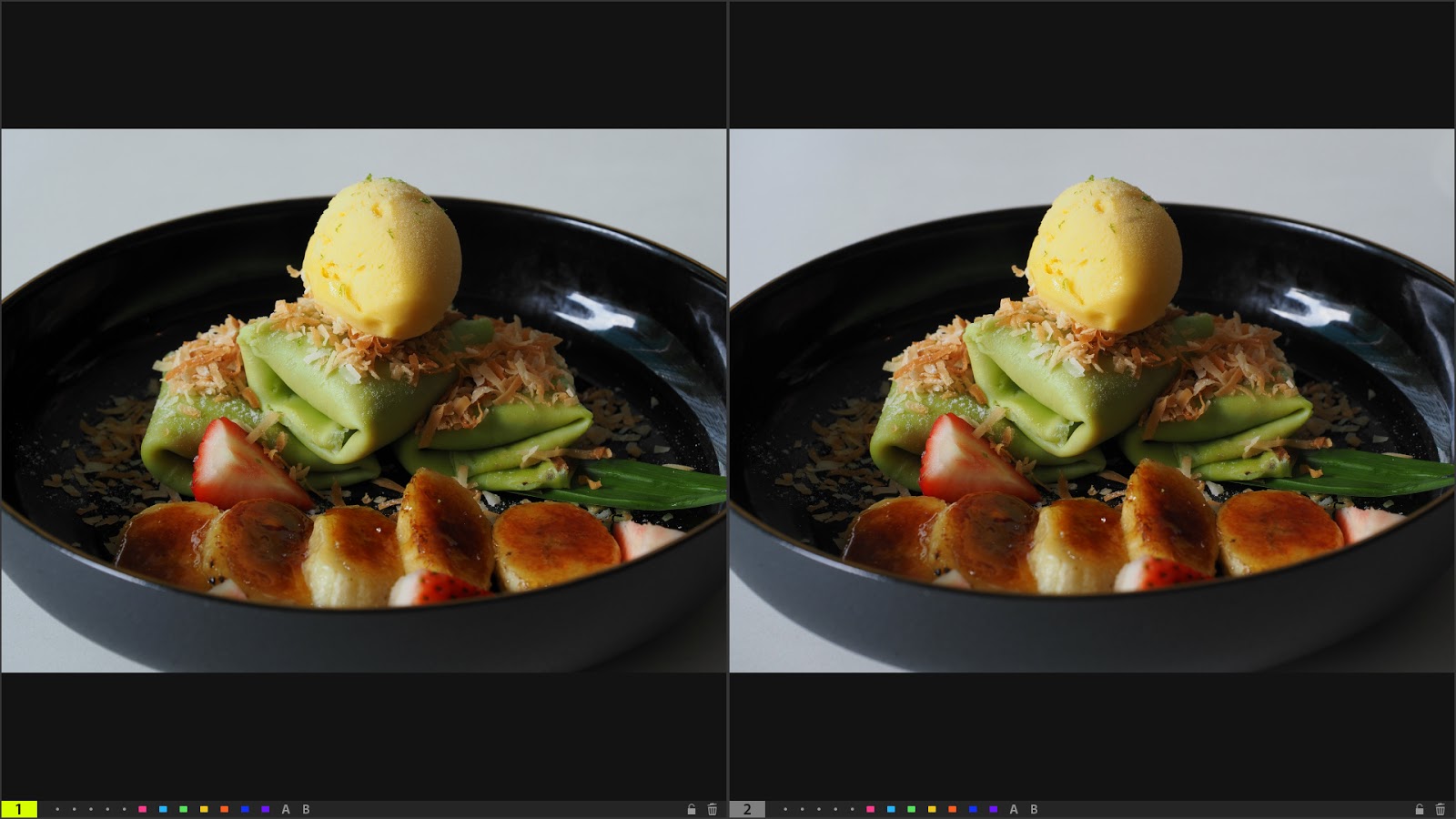 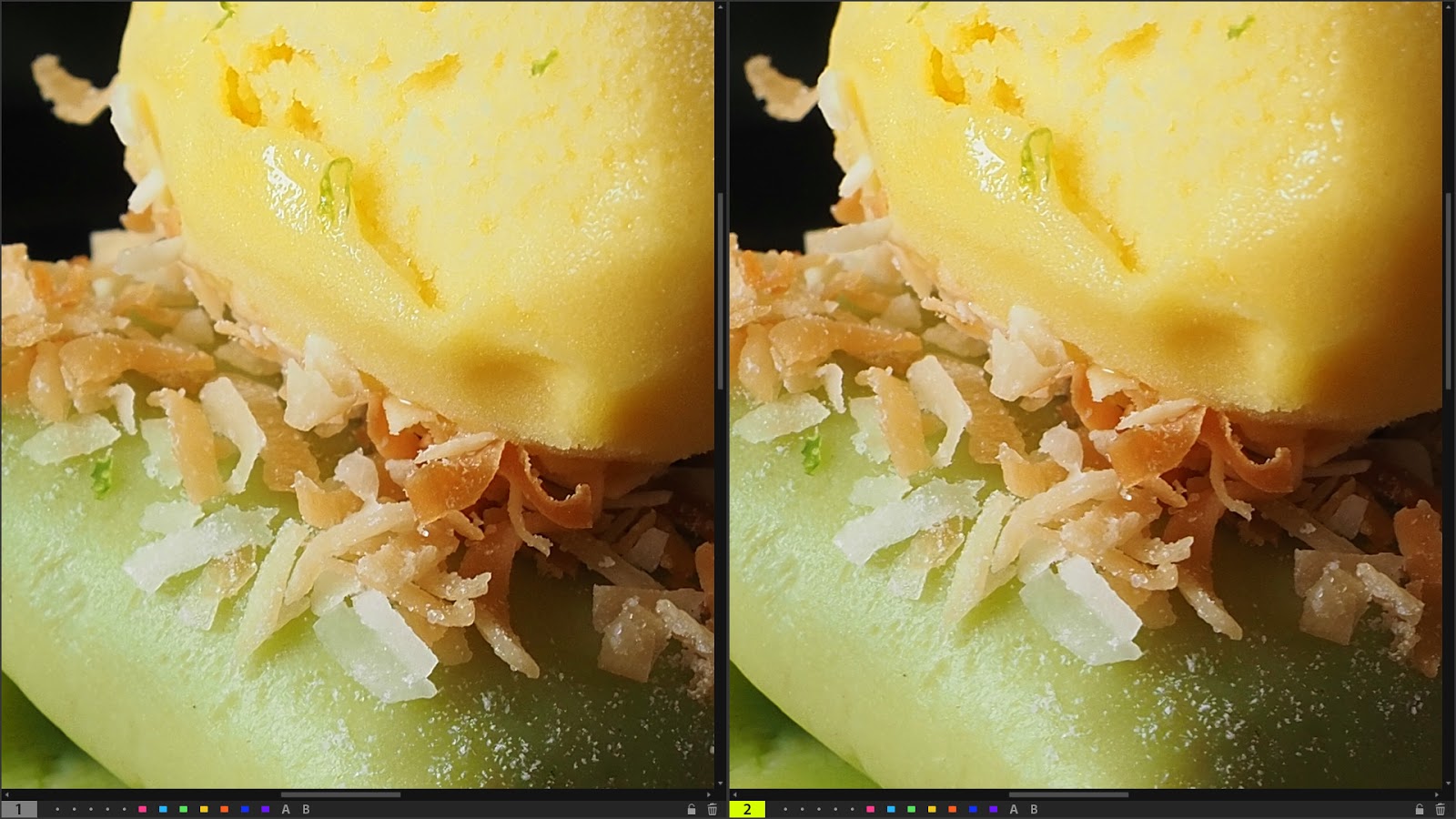 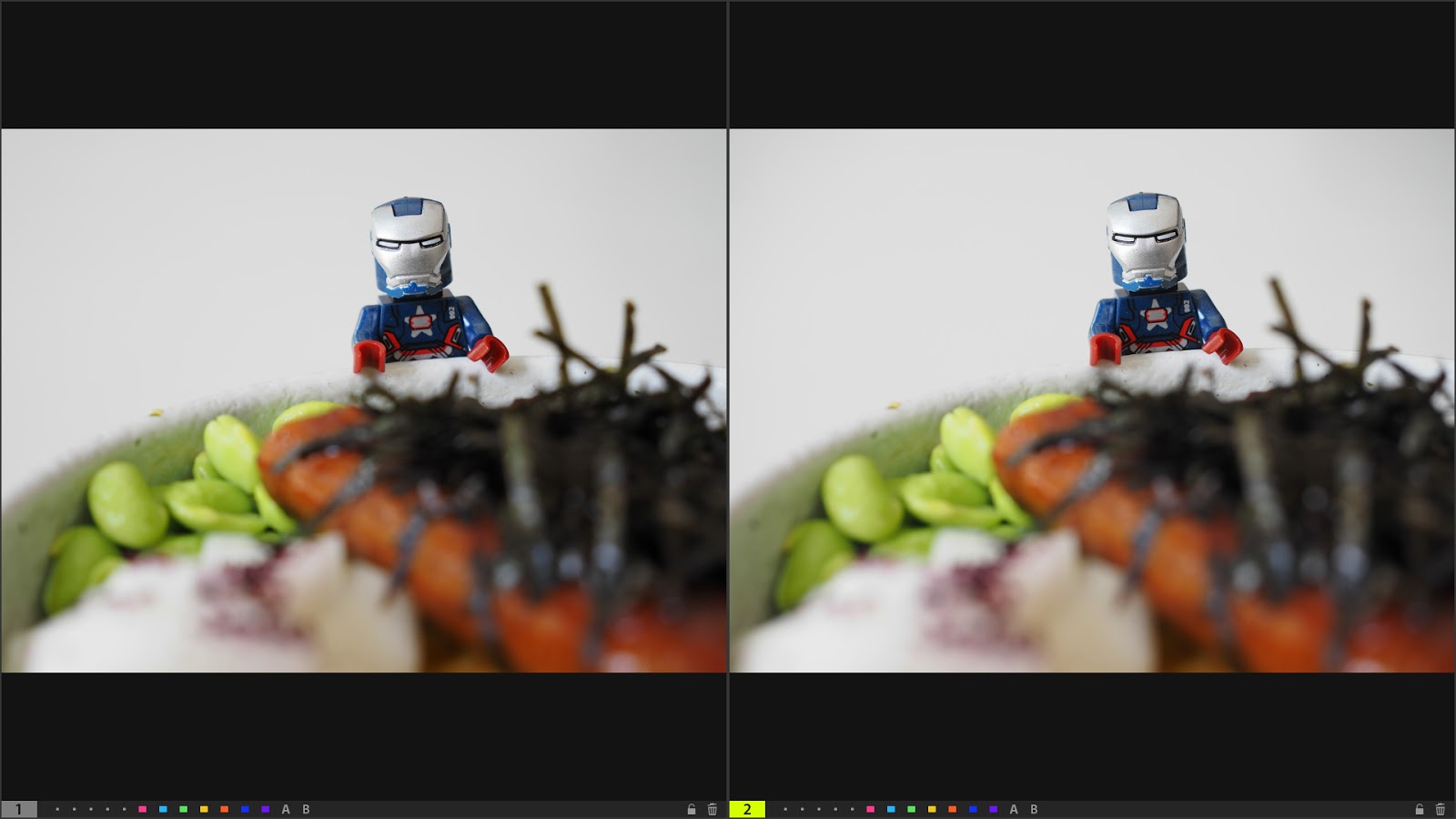 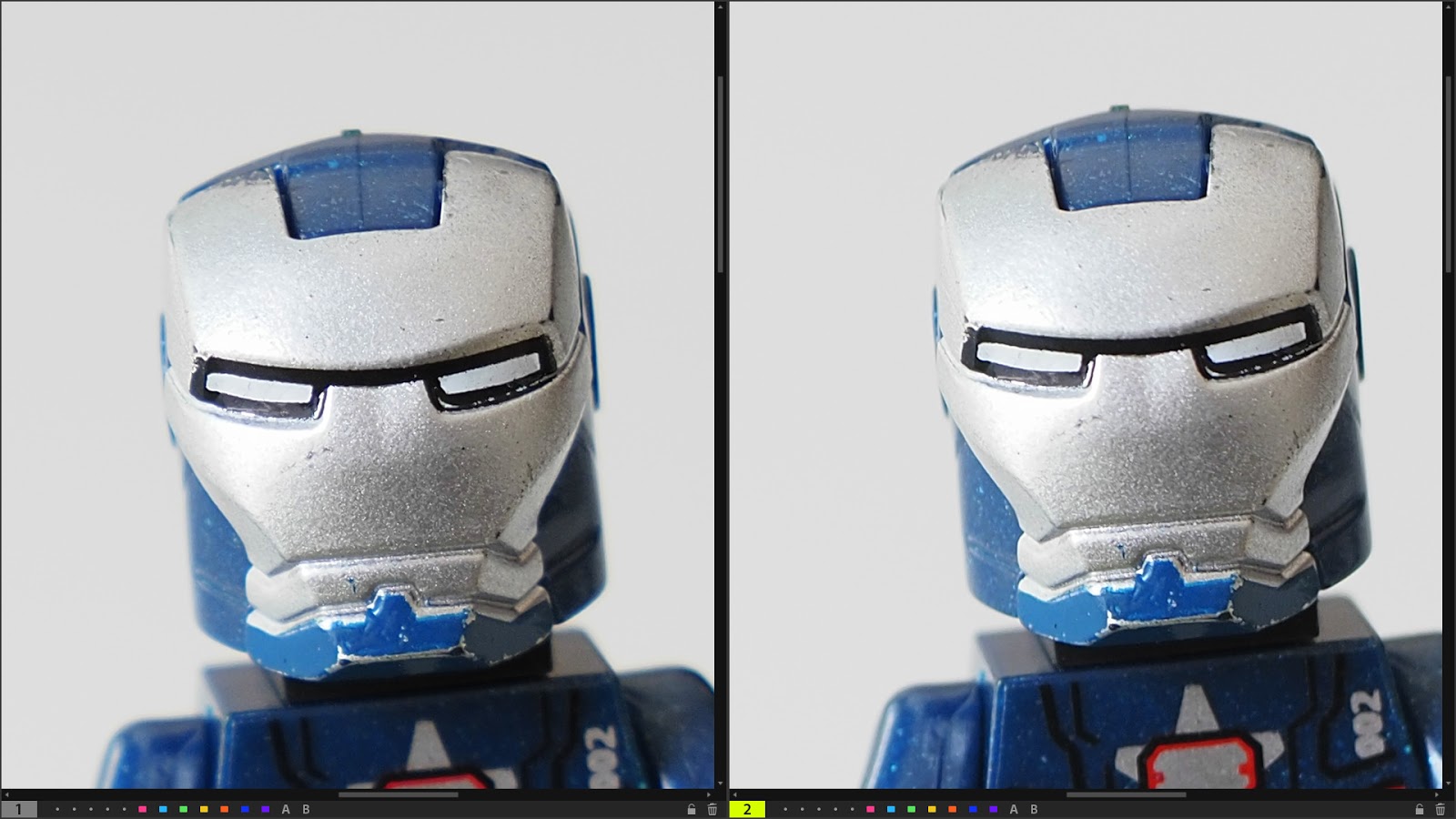 4) STARBURST/SUNSTAR EFFECT
Both 12-45mm F4 and 12-40mm F2.8 have very similar optical lens design (if you take the trouble to look up the lens design diagram), and they both have 7 aperture blades, meaning they can render starburst effect with 14 points. To achieve this effect, set the aperture to F16 or F22, and shoot against a strong source of light point, such as the sun. The starburst effect is not the best I have seen from any lenses or from Olympus, as Olympus 7-14mm PRO and 12mm F2 can generate better starburst effect, but the 12-45mm F4’s starburst is in no way poor. It is still one of the better ones coming from a zoom lens. Also, the effect looks identical to what the 12-40mm F2.8 can do.
LEFT 12-45mm F4, RIGHT 12-40mm 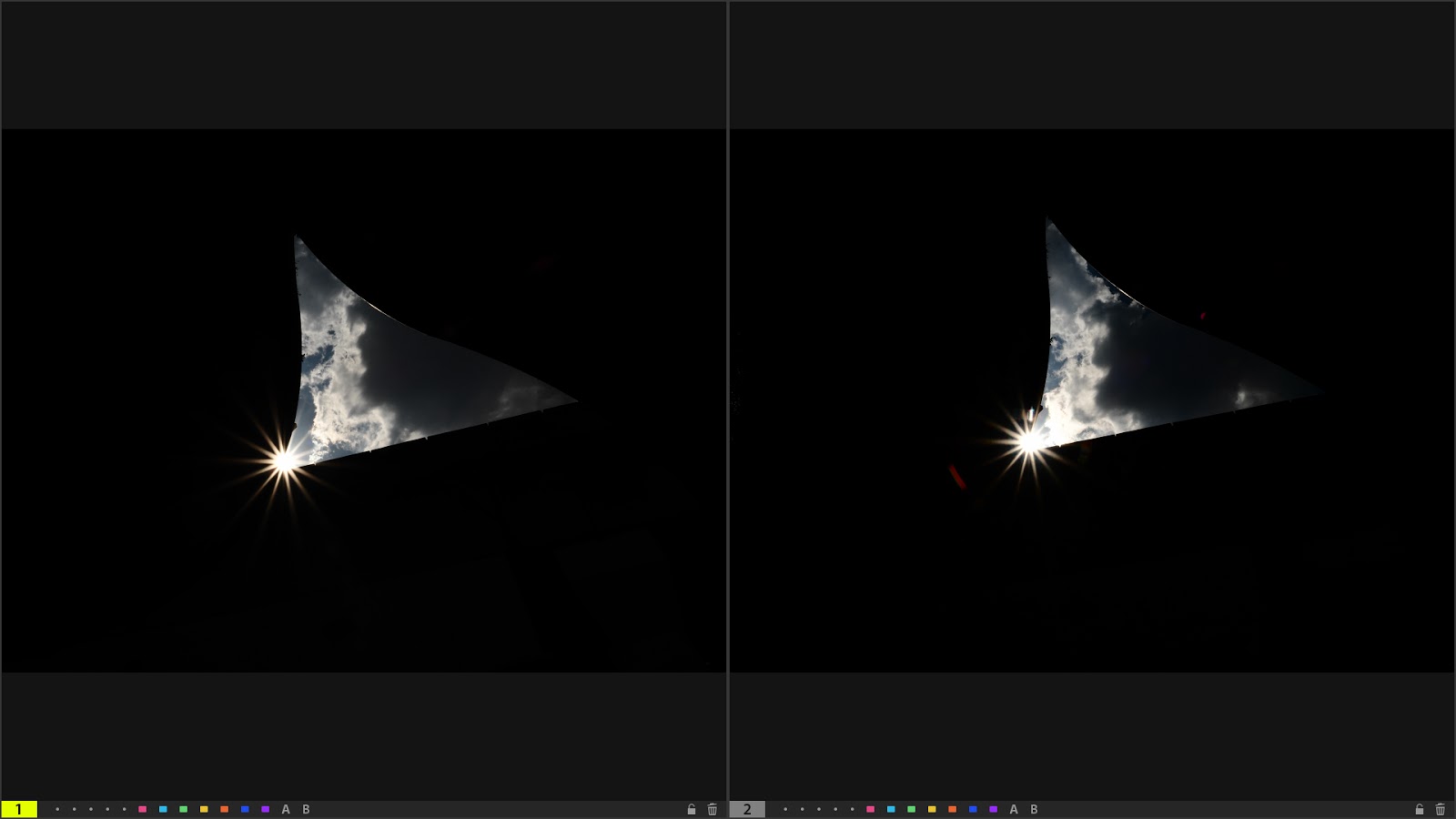 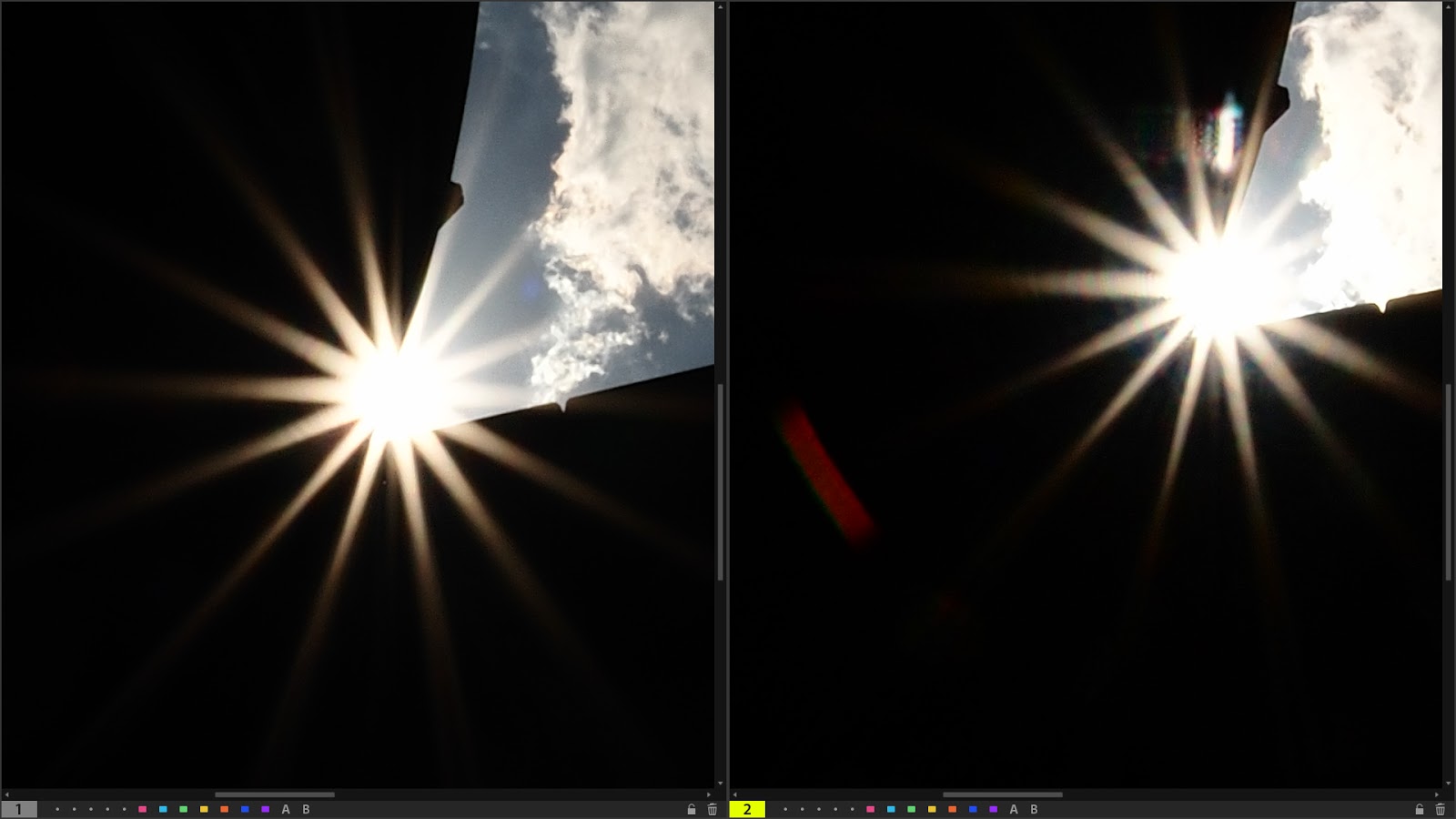 5) FLARE RESISTANCE
The difference in flare resistance is quite obvious between the two lenses, and 12-45mm is clearly the winner here. 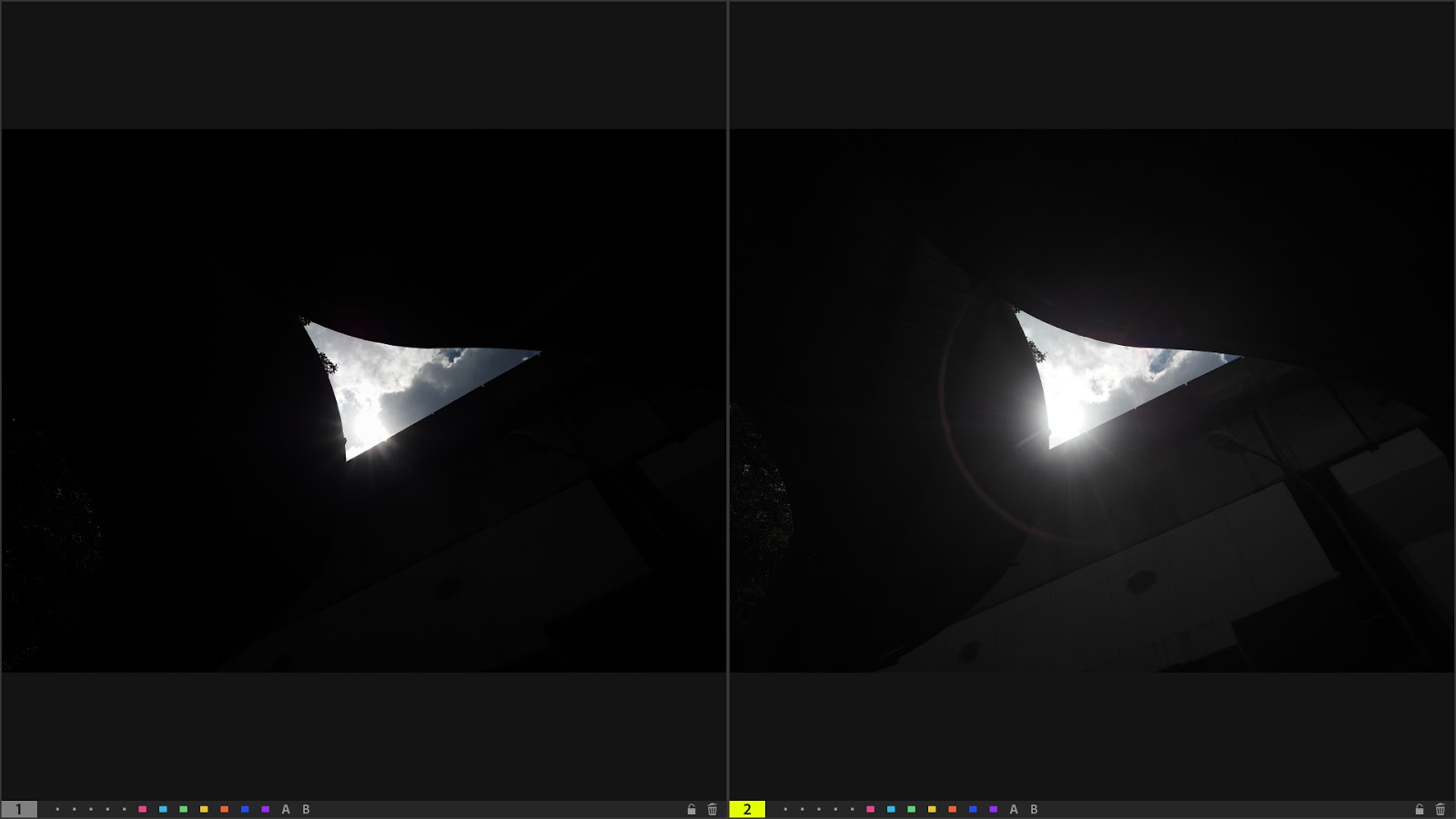 6) BOKEH
I have mentioned that the 12-45mm F4 renders beautiful bokeh, the out of focus area being creamy, smooth and soft-looking. However, there are some floating image samples done by other more reputable review sites (who am I to challenge them?) that claimed otherwise – those sample images showed really unpretty looking “onion” shaped bokeh balls. So here I give you my own bokeh ball samples from the 12-45mm F4 PRO lens. 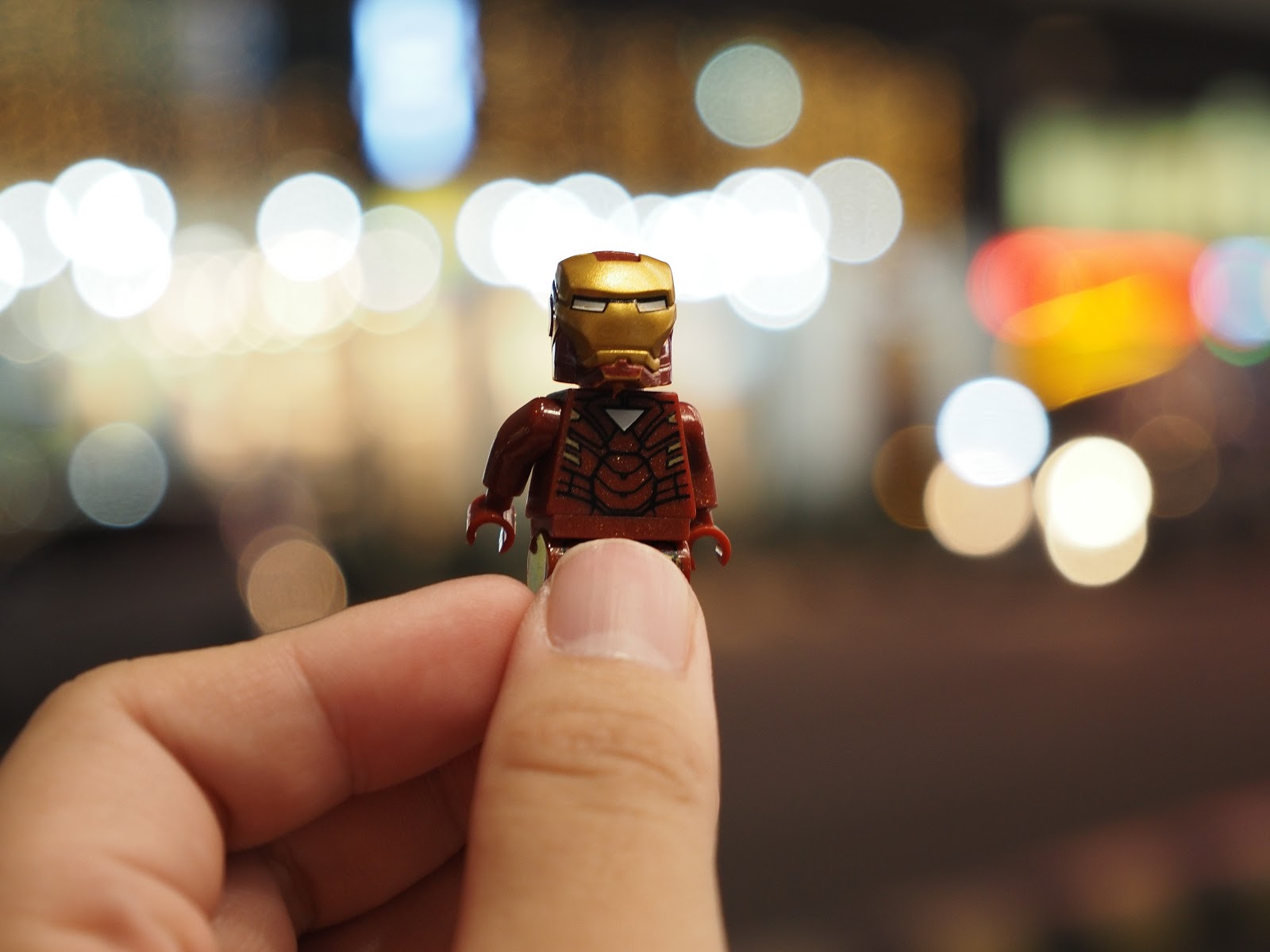 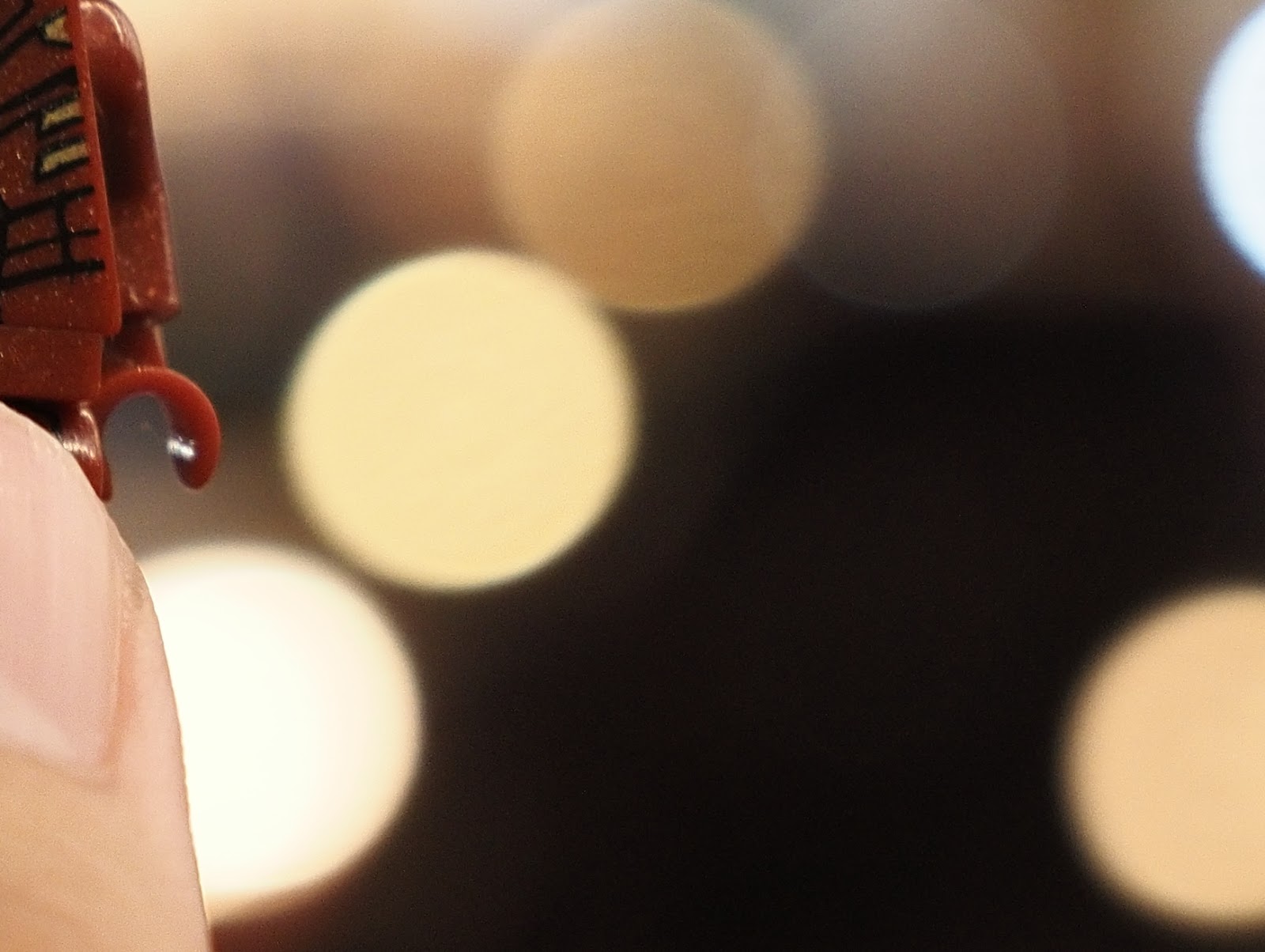 12-45mm F4 PRO bokeh test
On the topic of onion ring effect on bokeh balls, this was quite a common issue for older Olympus PRO lenses, and yes, the 12-40mm F2.8 suffers from that as well. You can clearly get the “onion” effect shooting with 12-40mm, and this was clearly improved in the newer 12-45mm F4 PRO, and any other newer Olympus lenses, if you have tried them recently. 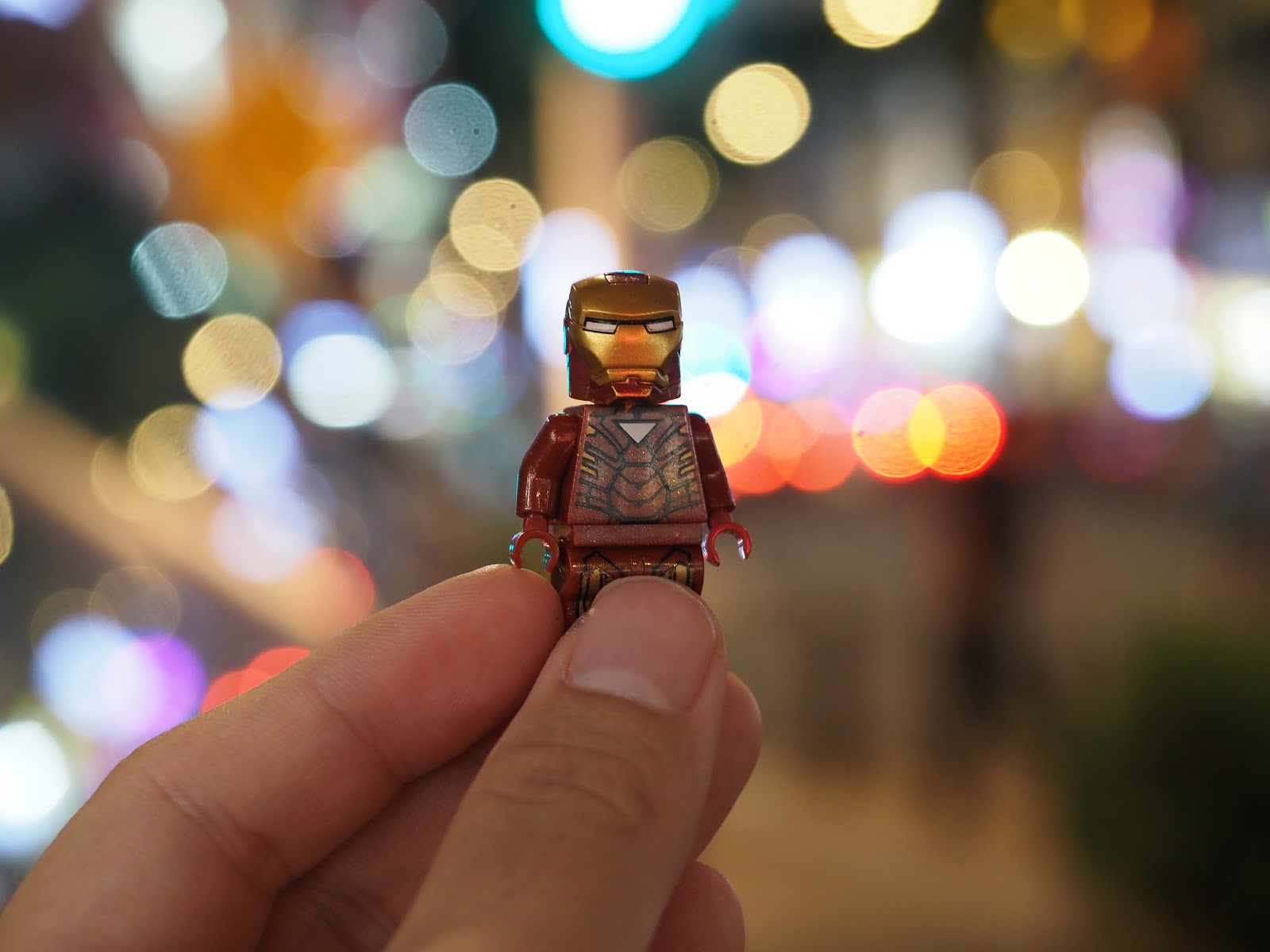 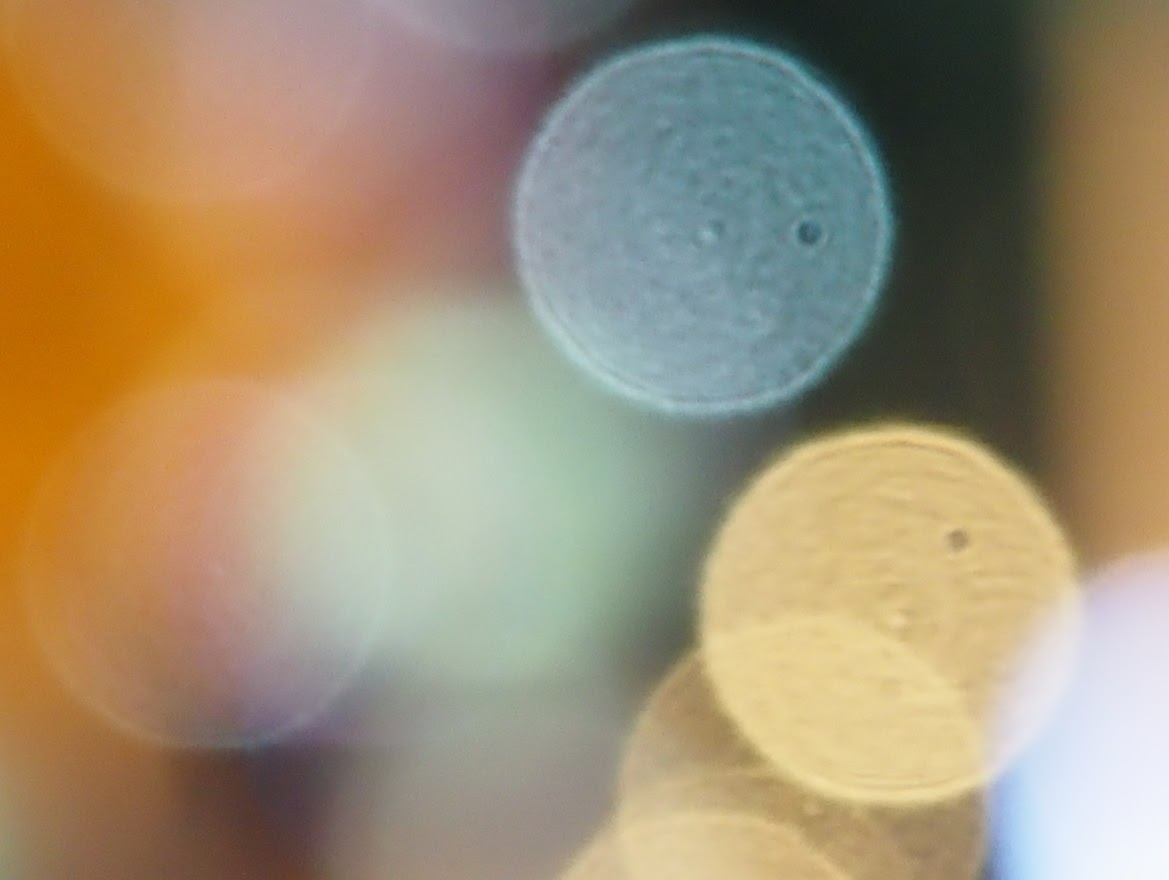 12-40mm F2.8 PRO Bokeh Test
That’s all I have for this comparison tests between Olympus M.Zuiko 12-45mm F4 PRO versus 12-40mm F2.8 PRO.
Both 12-45mm F4 and 12-40mm F2.8 performed really well, and the differences in terms of optical performance is negligible, both lenses are incredible sharp and can resolve amazing amount of fine details and excellent contrast, rendering sharp and realistic looking images. The 12-45mm F4 has slight advantage when it comes to wide angle shooting at the widest 12mm (center sharpness) and close up shooting performance. However the 12-40mm F2.8 fares a little better at wide angle corner sharpness and also at the farthest telephoto end shooting. The 12-45mm F4 PRO being the newer lens has the advantage when it comes to flare and ghosting resistancethanks to the  Zero coating by Olympus, and the bokeh balls do not exhibit “onion shape”, which the older 12-40mm F2.8 is quite prone to if that is a big issue for you.
If you already own the Olympus M.Zuiko12-40mm F2.8 PRO, or the 12-100mm F4 IS PRO, there really is no reason to get the newer 12-45mm F4 PRO lens, you can do everything you can do on the 12-45mm PRO with the previous mentioned two lenses.
However, if you are thinking to upgrade from your kit lens, either 14-42mm EZ pancake lens, or the older 12-50mm F3.5-6.3 EZ, this newer 12-45mm F4 PRO is a huge step up and is a PRO grade lens. You will see significant improvement in terms of the image quality you get with your cameras using the 12-45mm PRO.
I understand the frustration from some of you against Olympus for making a lens with overlapping focal length range, but the smaller and more compact build is not necessarily a bad thing. Having more choices is good for everyone, and Olympus knows what they are doing especially when it comes to optics. The 12-45mm F4 PRO is not for everyone, but if I want to go for travel, between the 12-45mm F4 and 12-40mm F2.8, I’d grab the 12-45mm F4 in a heartbeat just because it is so much smaller and lighter, yet I can confidently use it knowing there is no compromise in terms of image quality.