Raspberry Pi 4: The world’s favorite and cheapest computer just got a big upgrade 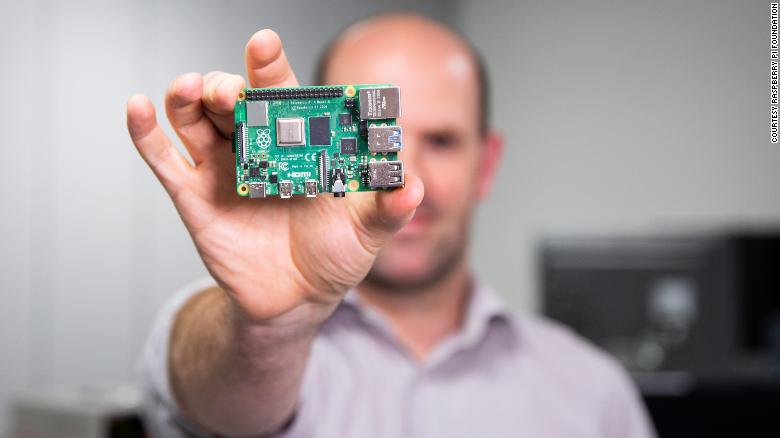 Raspberry Pi is a credit card-sized desktop computer that has won over millions of hobbyists. It just got a big upgrade: The first major new edition of Raspberry Pi since February 2016 launches Monday, promising faster speeds and support for more modern devices.
Raspberry Pi is old school: It looks like a raw piece of hardware with a bunch of outputs that hobbyists use to build games, robots, music, and digital art. In the past seven years, people have gotten creative with Raspberry Pi projects. One team of inventors built a private cellphone network by connecting a Raspberry Pi to a radio interface. Another took readings from sensors to check the weather and air quality.
Raspberry Pi runs a version of the Linux operating system and comes with a range of coding languages like Python and C++. The basic model doesn’t come with a keyboard, mouse or monitor.
Despite its size and bare-bones package, Raspberry Pi has become a phenomenon. The UK-based nonprofit Raspberry Pi Foundation, which makes the device, has sold about 27 million Pi devices in total, including about 6 million globally in 2018, according to Raspberry Pi inventor and Foundation co-founder Eben Upton. That gave it 2.5% share of the global PC market in the last quarter of 2018, according to industry research group Gartner.
No one expects Raspberry Pi to start challenging Microsoft (MSFT)Windows PCs or Apple (AAPL)Mac computers anytime soon. Most people aren’t hobbyists — they want to buy a computer that’s ready to go out of the box.
But Upton said he believes the new Raspberry Pi 4 could fuel more sales.
The new Raspberry Pi can support two HDMI displays at resolutions up to 4K, according to the company. It’s also faster than its predecessors but it still costs $35 for the basic model and $55 for the 4 GB of memory model.
“Historically, Raspberry Pi products have had somewhat limited performance, and so haven’t been able to compete in the mass consumer market. We see this changing with Raspberry Pi 4,” said Upton, referring to how past models of Pi were a bit slow when it came to browsing sites like Gmail, YouTube or Facebook.
These days, the supply chain is capable of making about a thousand Raspberry Pi devices an hour, Upton said. Some corporate clients have adopted the computer as well.
Upton said that as a newcomer, the company needs to improve its marketing to expand out of the areas it’s “comfortable” in, including hobbyists, schools and corporations.
Upton initially saw the device as a way to bump up the number of students at the University of Cambridge interested in science and technology and their skill levels, while he worked at the school as a director of studies. He told CNN Business that he had imagined getting a few thousand devices in the hands of students.
Those initial ambitions were quickly fulfilled.
Raspberry Pi got faster, offered support for 4K resolutions, and still kept costs low by achieving scale, Upton said. He also credits Moore’s law: Intel founder Gordon E. Moore’s prediction that computers would speed up and gain capabilities, while decreasing in relative cost, about every two years.
“While Moore’s law isn’t working at quite the same rate it used to, there is still some gain available just from the passage of time,” Upton said.
There’s room to grow. Even though Raspberry Pi would likely benefit those in developing countries who could use the infrastructure, adoption from the developing world is lower than it could be, Upton said.