Skip to content
Smartphone photography is the future, there is no denying that, and the declining traditional camera sales is the proof of that. Almost everyone owns a smartphone, and the camera is everyone’s hands. When it come to assessing the smartphone camera’s quality, all the rage goes to computational/AI advancement, the pixel count, night mode (low light shooting), HDR implementation, the fake bokeh and overall smart software handling overall shooting process. I admit the smartphone camera is improving drastically, but a lot of people are missing one very critical factor that determines the look or outcome of a photograph – the choice of lens focal length and the corresponding perspective. With the majority of lens being the default wide angle lens, with the new inclusion of ultra wide angle, not many smartphone users know how to manage wide angle shooting effectively, or deal with the big problem that comes with it that can completely destroy a photograph – perspective distortion.
Wide angle lens when not used carefully, can cause excessive distortion to an image. This has nothing to do with the quality of the camera or lens, perspective distortion happens to all wide angle use, it is just the nature of the lens fitting as much as possible within a frame. Perspective distortion can be seen as subjects in an image appear being artificially stretched and looking disproportionate. For example, close up wide angle portraits usually will either elongate or shorten limbs, stretches the shape of the head, making it bigger than normal in comparison to the body size. Also, when shooting buildings, looking up, the verticals are not perfectly straight and it appear as if the buildings are falling down. 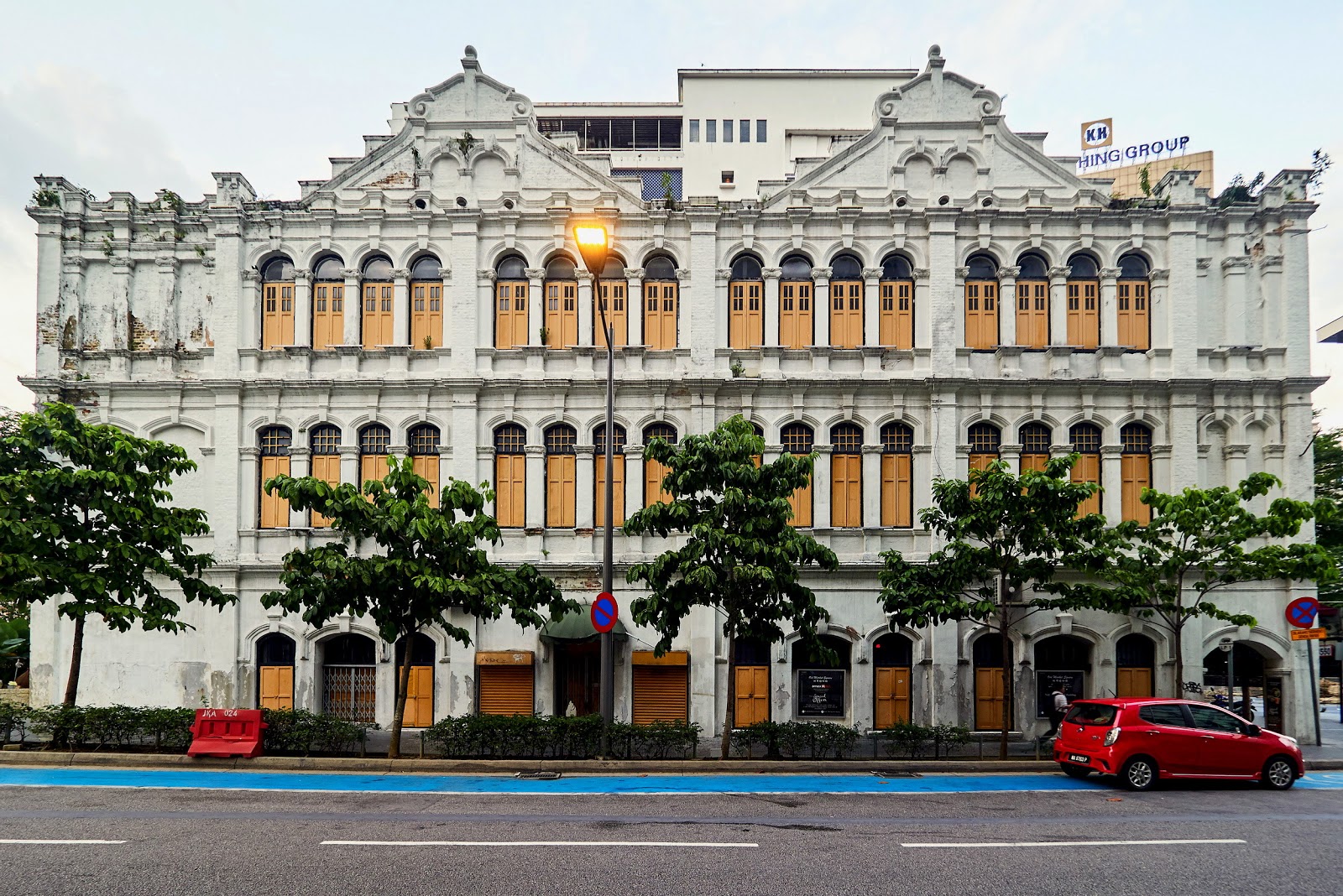 Example of a wide angle shot with corrected perspective 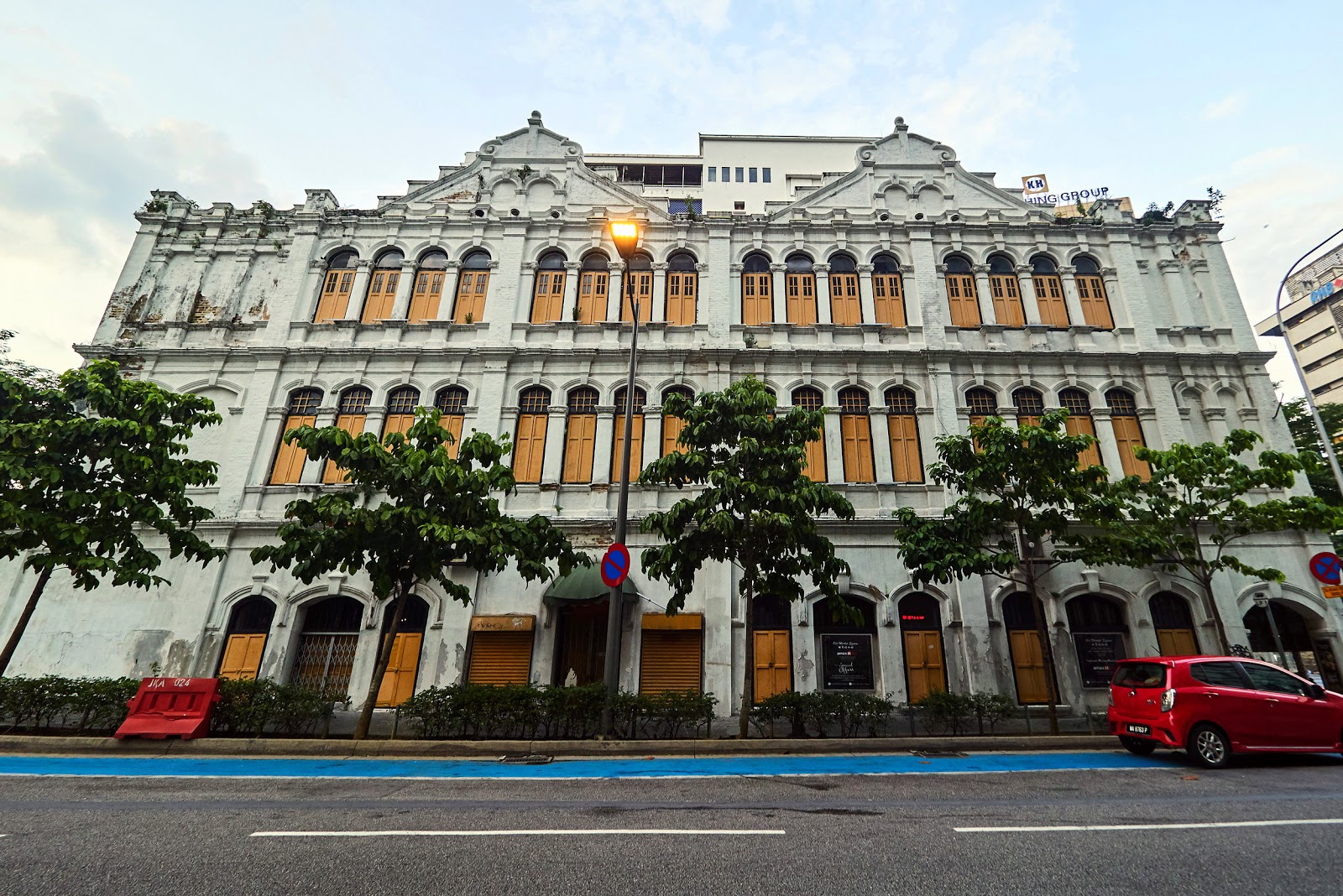 wide angle with perspective distortion, uncorrected, straight out of camera
The biggest problem comes when shooting human subjects with wide angle lens. Since it is the default on most smartphones, you have no choice but to deal with it. When going too close, for example taking a selfie shot, most people will try to hide the double chin hence angling the camera upward, looking down from the eye , and that can cause the forehead to be wider than usual, nose appear larger, and if done wrongly, the face shape might appear nothing that dissimilar to an alien head. 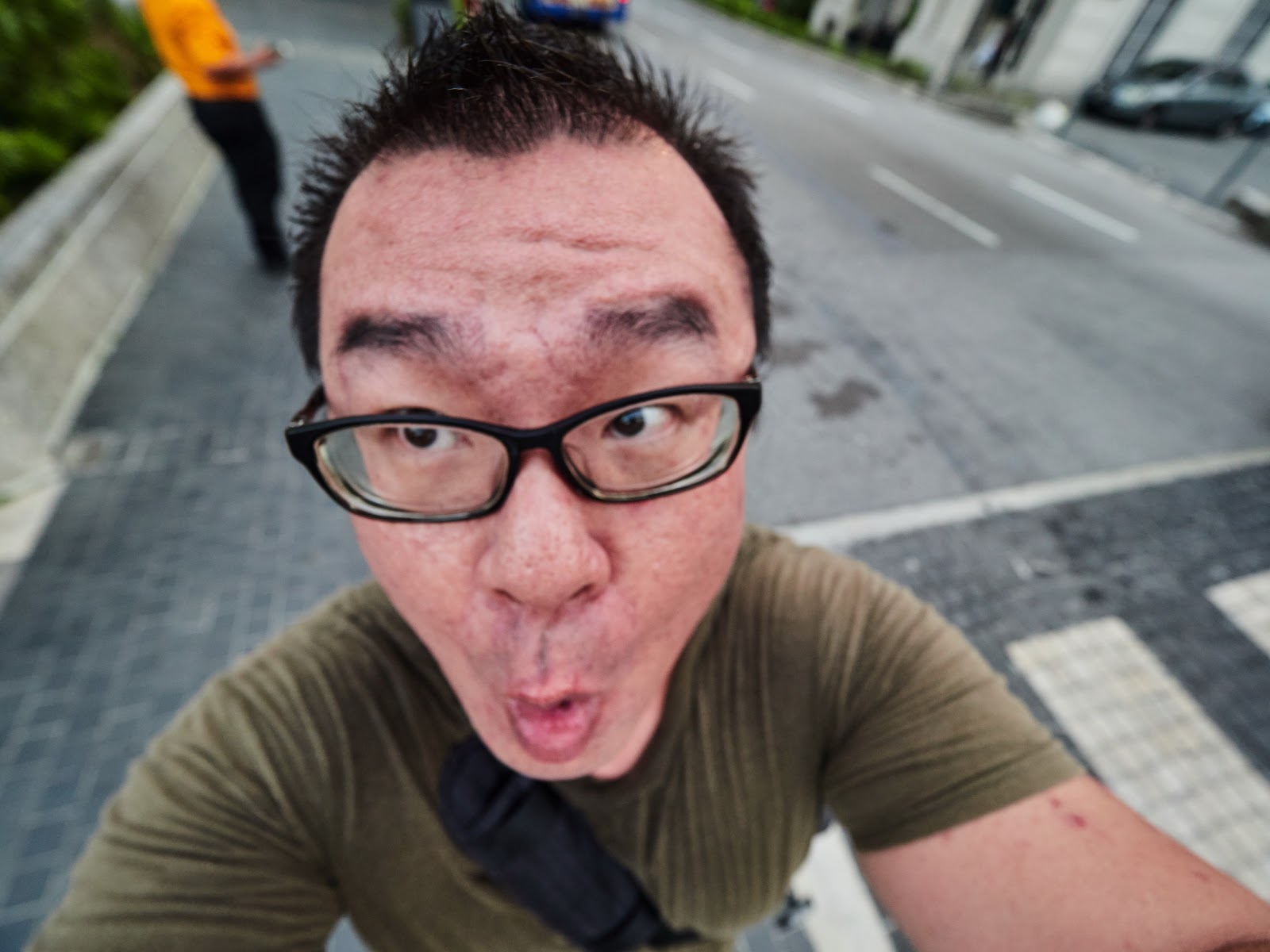 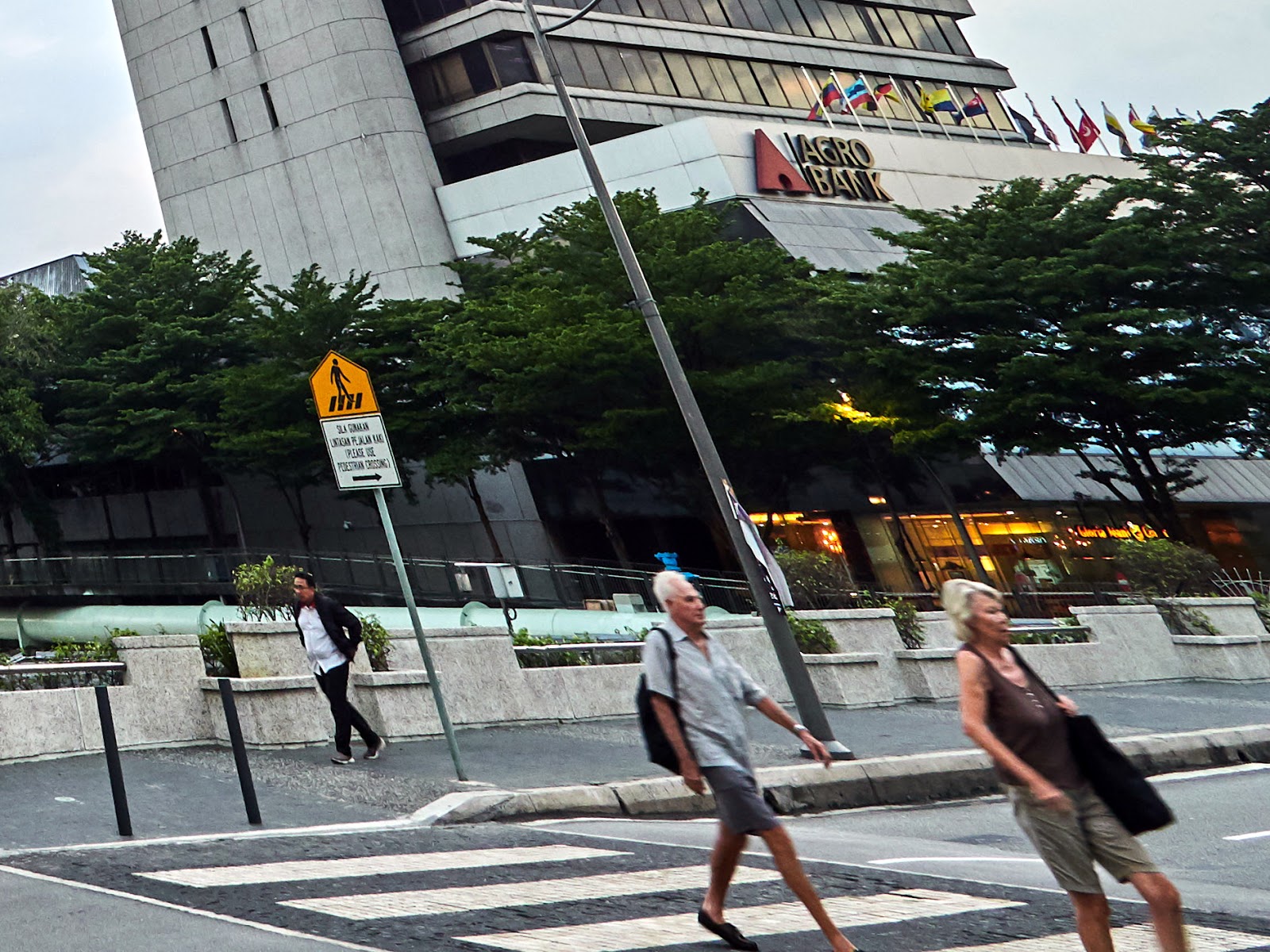 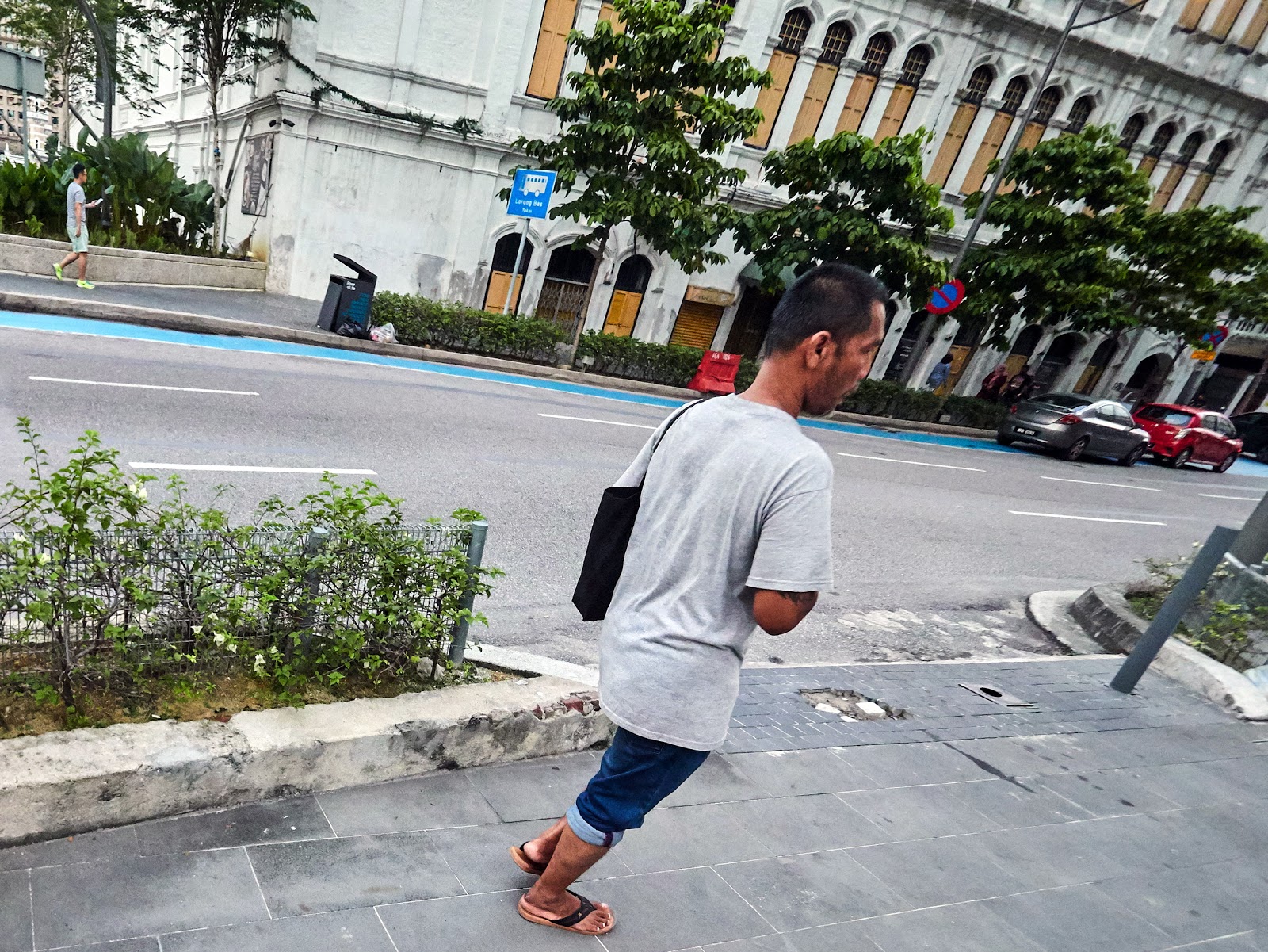 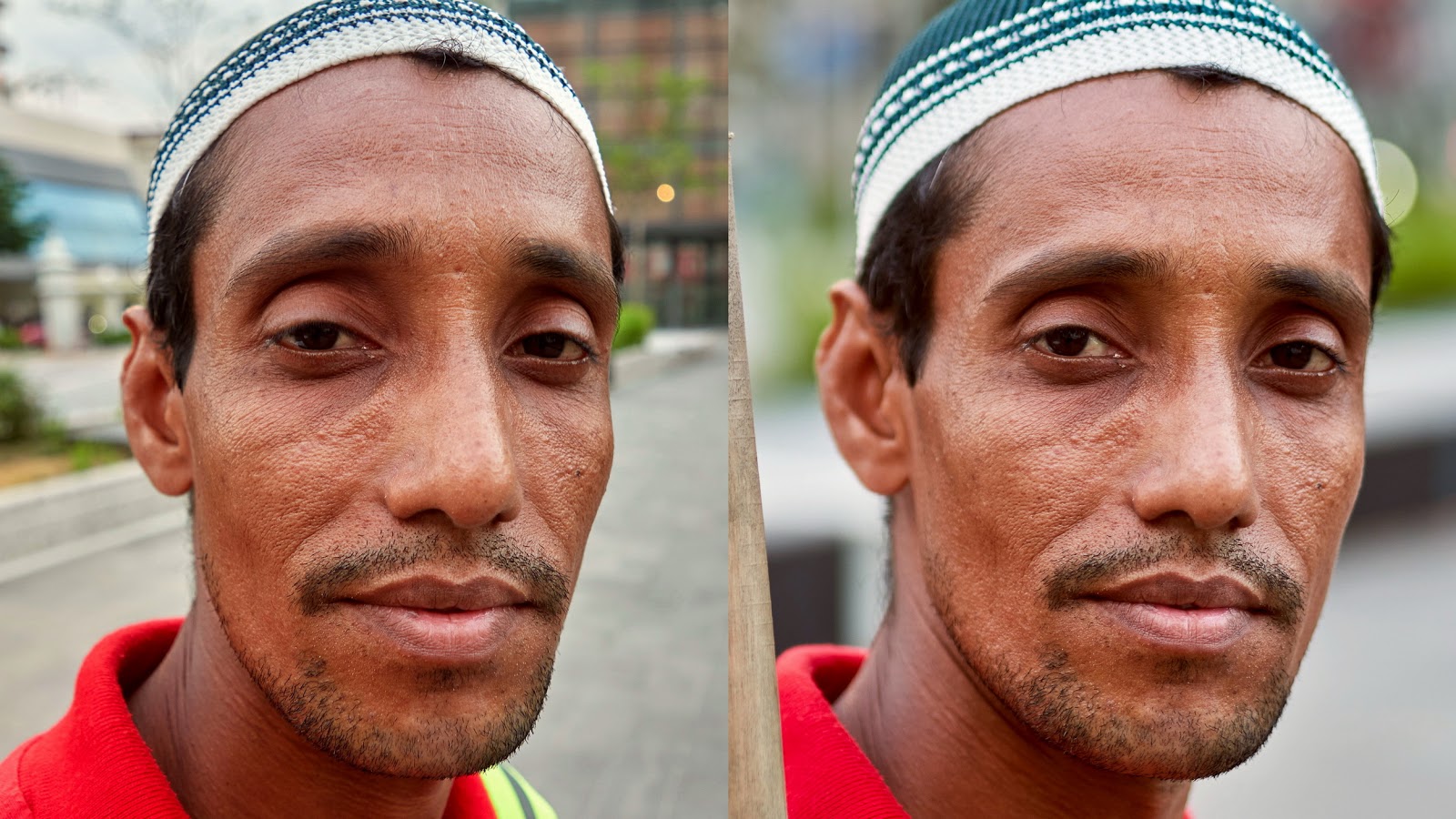 Left:  28mm equivalent, looking unnatural
Right: 50mm equivalent, looking more realistic and appealing
Typically for fashion and portrait photographers, the popular choice to shoot flattering portraits are lenses that are much longer, such as 85mm equivalent or longer. 70-200mm telephoto lens is a popular choice to render realistic and natural looking portraits, with minimal perspective distortion, hence no stretched limbs, no weird looking head or ugly disproportionate looks. This perspective distortion is not a problem that can be solved via software or computational/AI photography, it is just the nature of how the images look, there is no avoiding it if you are utilizing wide angle lens all the time. There are some ways to manage the amount of distortion (we will explore this) but it is crucial to recognize the cause of the problem and how ugly the results can be, if care is not taken during the shooting process.
Some newer smartphone cameras include a “telephoto” lens which is roughly equivalent to 50mm, that could solve a lot of perspective distortion issues.
It was not easy to use wide angle lens to begin with. Besides excessive perspective distortion (which is destructive) wide angle lens fits EVERYTHING. Most photographers photographers prefer clean, simple, straight to the point framing so that attention is not diverted away from the main subject in the image. When wide angle is being use, you may accidentally include some subjects that can be distracting in the background, causing a messy composition. 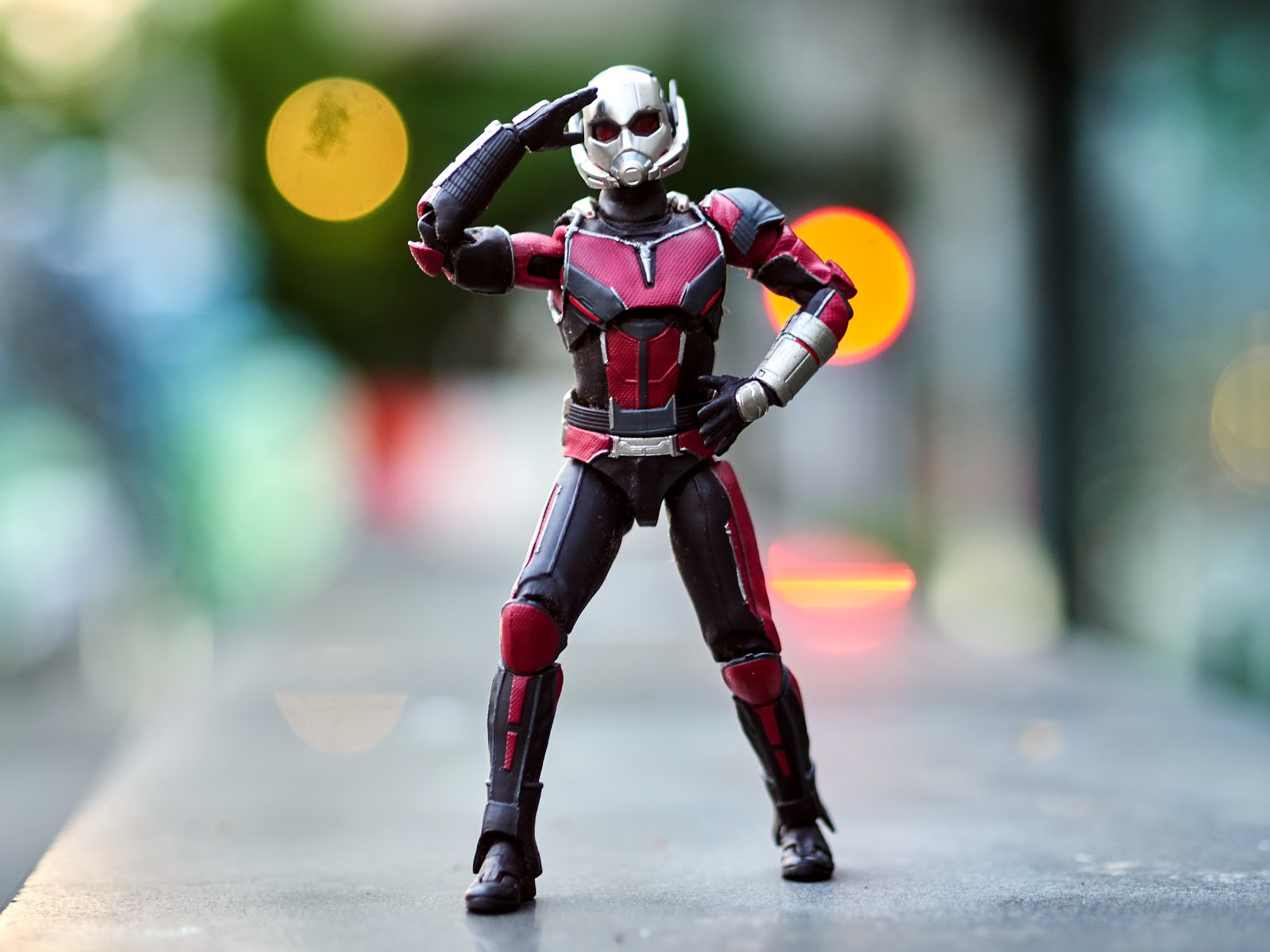 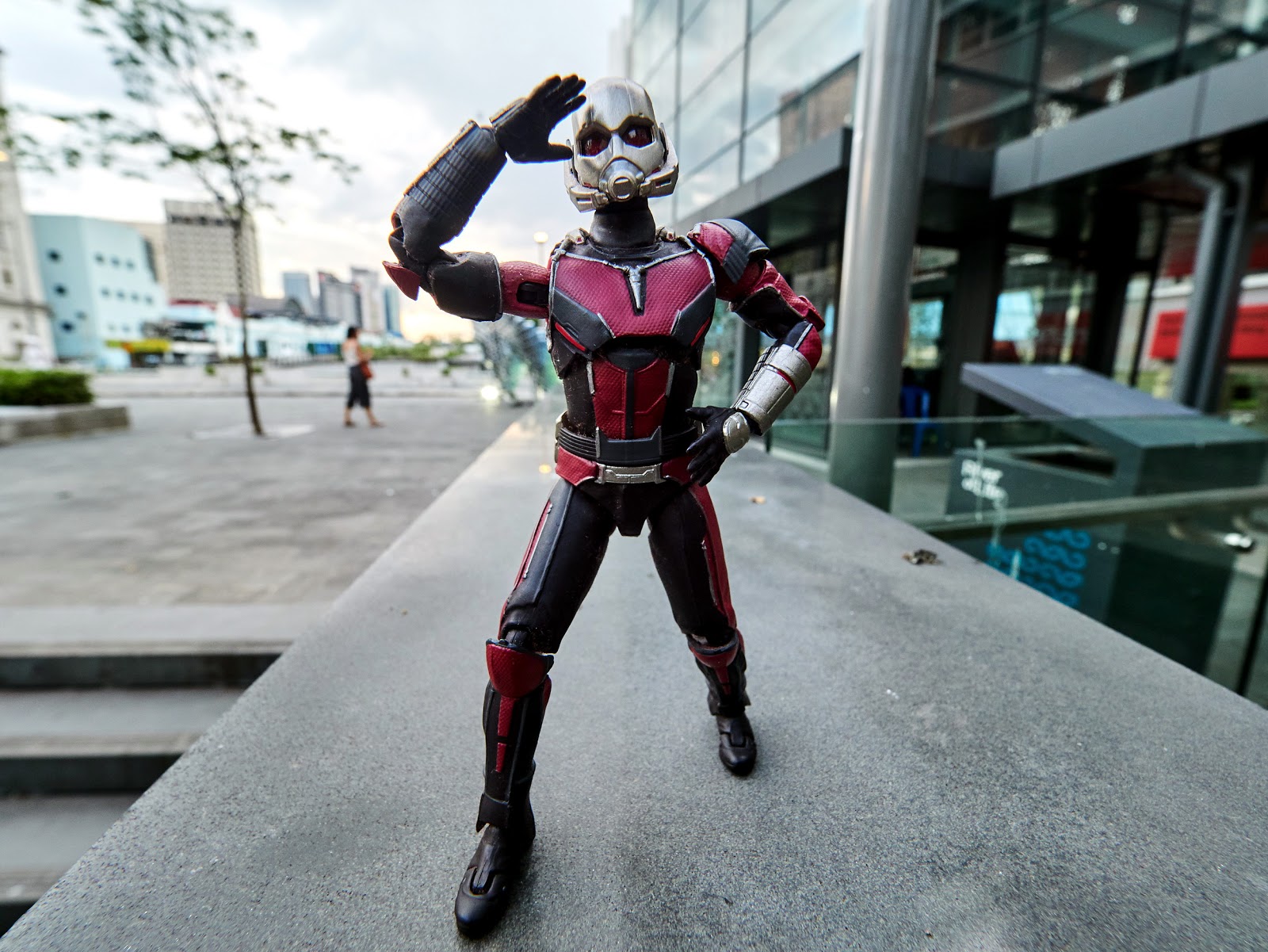 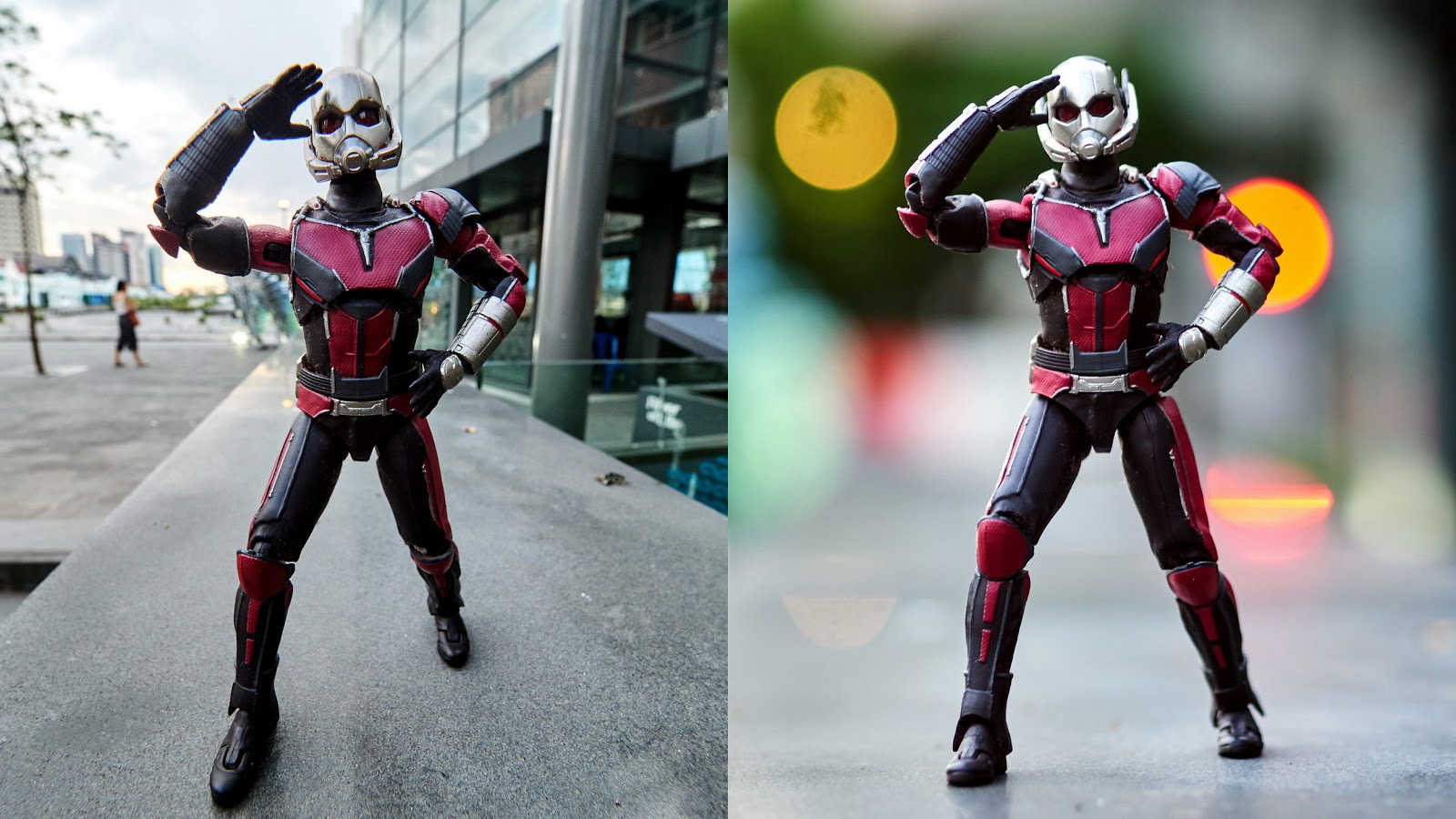 If you have your portrait taken, would you really want to look like the Antman on the left? Wide angle makes ugly human portraits.
So how can we fix this problem? Here are a few pointers.
1) Don’t Use Wide Angle If Possible
Not all situations require the use of wide angle, and sometimes we can get away with longer focal lengths. Consciously trying to use longer focal lengths can minimize the problem of perspective distortion. If your smartphone has an option for longer lens camera, use that, many flagship or higher tier smartphones have a “medium telephoto” lens for this purpose. I am not saying avoid wide angle or ultra wide angle at all costs, just use them when absolutely necessary, for example  to fit as many people in a group photograph as possible shooting in a tight space.
2) Center Your Subject
Usually perceptive distortion gets worse being away from the center of the frame.Avoid placing anything important at the sides, edges and corners of the frame. Keep the subject, especially human right at the center. And do not tilt the camera unnecessarily, or shoot from high or low angles. Try to keep the straight lines straight – verticals and horizontals.
3) Dno’t Shoot Too Close
I know I know, the famous saying by Robert Capa, if your photo is not good enough you are not close enough. That is not valid for wide angle photo, if you just step back a little bit, allowing a bit of negative space around your subject, and then crop in, you will get a much better, more proportionate looking image. The nearer your wiee angle lens is to the subject, the more exaggerated the perspective becomes. 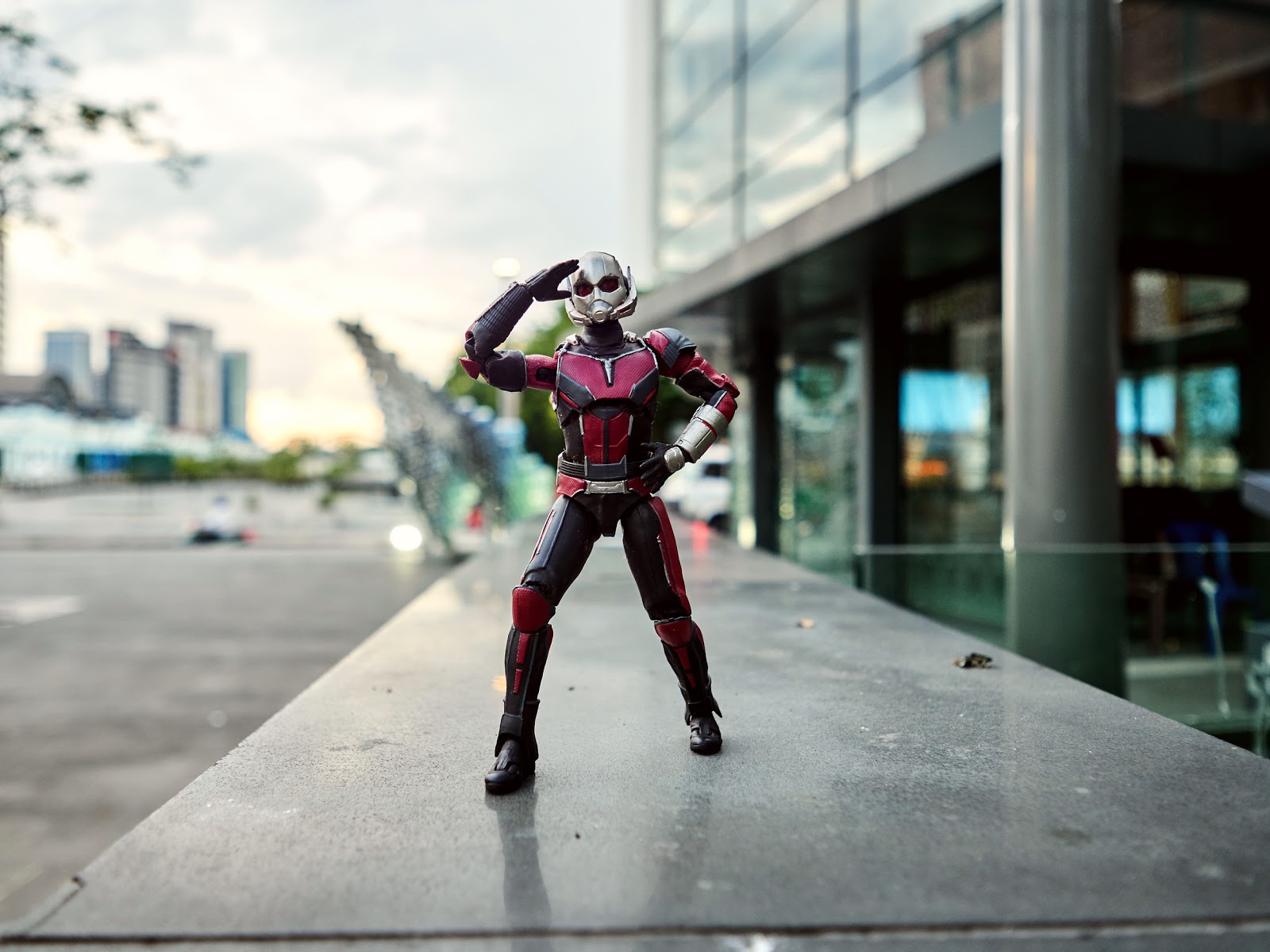 Keep the subject in the center, and do not shoot too close. This minimizes perspective distortion when shooting with wide angle lens. 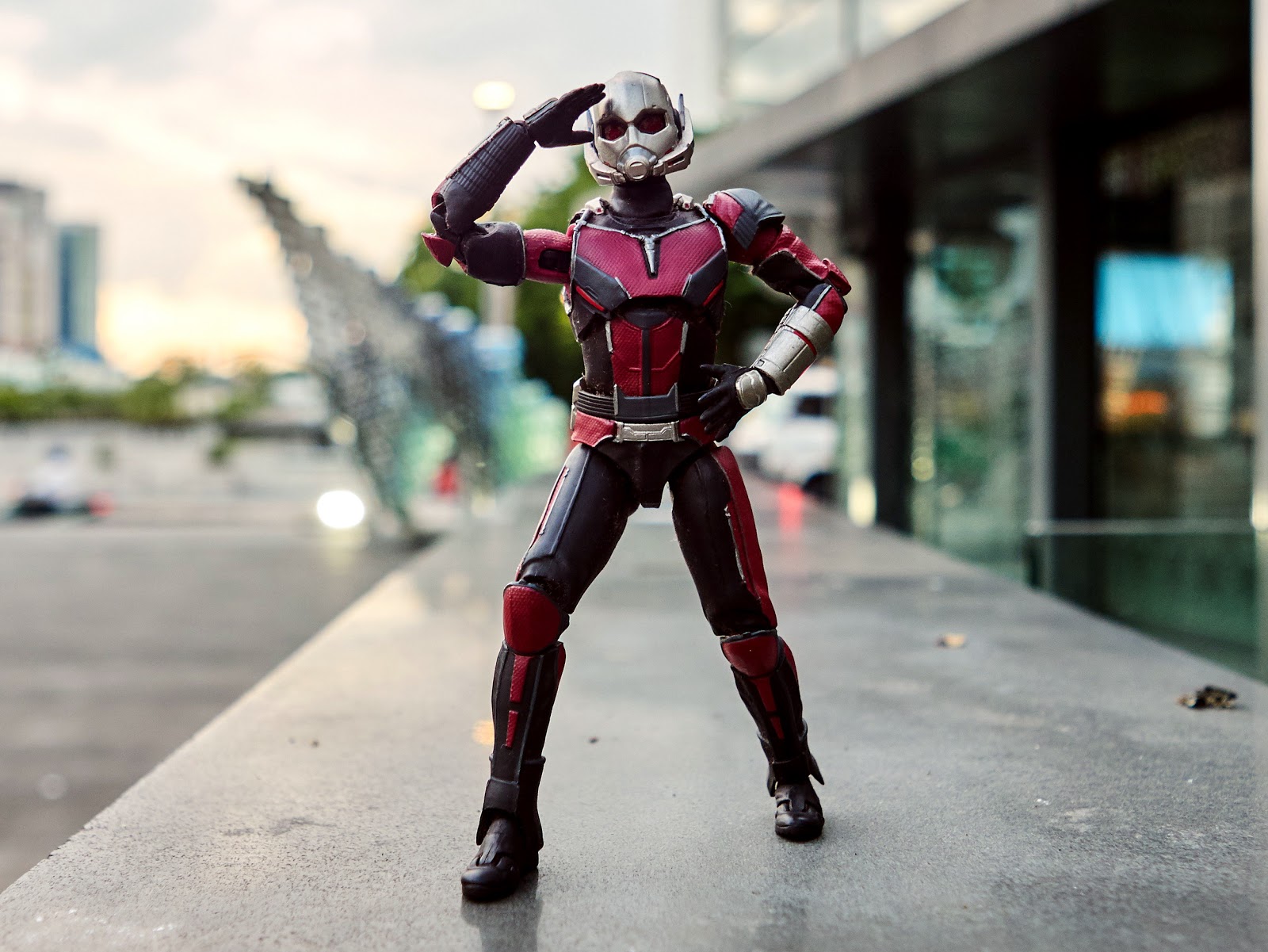 Same image as above, but cropped in a little.
I hope you find this article useful and that you will start to consider minimizing perspective distortion when you shoot with your smartphone camera! Do you have any more tips? Share with me in the comments below.